Sandy Jones, an experienced caregiver for orphaned primate infants, became the new DFGFI Gorilla Rehabilitation Manager in March. She spent her first two months making the acquaintance of each of the 11 young gorillas that are cared for by the Fossey Fund and the Mountain Gorilla Veterinary Project in temporary facilities in Kinigi (Rwanda) and Goma (Democratic Republic of Congo). Most were confiscated from poachers while infants, although two were orphaned by armed conflict in the DRC.

“My challenge is to ensure that all the confiscated gorillas we now care for develop physically, emotionally and socially and display appropriate gorilla ‘etiquette,’ " Jones explained. The social skills are critical because the youngsters are being prepared to eventually join wild gorilla families in the forest. They include six Grauer’s (eastern lowland) gorillas and five mountain gorillas, and range in age from 2 to 7 years. 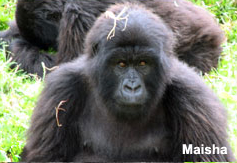 Jones is well acquainted with the devastating effects primate infants, especially gorillas, suffer when they are separated from their families and familiar surroundings, but she is upbeat about the condition of the 11 currently in “foster care.” Although in the past fewer than 10 mountain gorillas have survived in captivity, and then only for short periods, Maisha, a female mountain gorilla who is the oldest of the group, is thriving after seven years in care at Kinigi. She dominates her gorilla companions and “acts like a princess,” Jones reports. 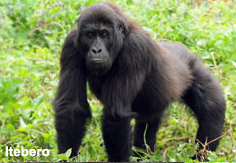 Ntabwoba, a 6 and ½-year-old Grauer’s gorilla male, enjoys playing with items he finds in the facility, especially during “enrichment activity” periods. He and Kaboko (5-year-old mountain gorilla male) and Itebero (6-year-old Grauer’s female) are close friends who often run, wrestle and laugh together. Kaboko is able to join in the fun despite loss of one hand that had to be amputated due to a snare wound. He is the only male mountain gorilla in captivity. Itebero has distinguished herself by learning to use rocks as tools to crack nuts.

Pinga, at almost 7 years old, is the oldest Grauer’s gorilla in the group. She loves food and likes to watch Maisha play with the enrichment toys. Serufuli, Dunia, and Tumaini, are all Grauer’s gorillas, ages 5 and ½, 4 and 3 respectively. Dunia is very fond of the enrichment toys also and plays with them long after they are much the worse for wear. Serufuli and Tumaini, the youngest, are quieter; Tumaini still needs a lot of comfort from her caregivers but is experimenting with nest building. 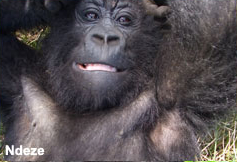 In Goma, two mountain gorilla infants — Ndeze and Ndakasi — attracted international attention when they were rescued following massacres of their family members two years ago. They are now both healthy and lively, and have become close friends. At just over 2 years old, both are being weaned from milk. Mapendo, a 4-year-old Grauer’s gorilla female, arrived a year and a half ago and still spends her time with her caregivers.

We have just learned about the rescue of two more gorilla infants in the DRC and are expecting them to join the three already in care in Goma. Details will follow, so stay tuned.

The Fossey Fund is currently constructing a specially designed facility that will accommodate up to 30 gorilla orphans, on land in the DRC donated by the community-based Tayna Center for Conservation Biology and funded by a grant from the U.S. Fish and Wildlife Service’s International Conservation Division. The Gorilla Rehabilitation and Conservation Education (GRACE) center will be operated through a public-private partnership between the Fossey Fund, the Congo’s wildlife authority (ICCN) and Pan African Sanctuary Alliance, with support from Disney’s Worldwide Conservation Fund. It is expected to help discourage the illegal traffic in infant gorillas and raise consciousness about this problem among the public.

Jones welcomes the new facility but hopes supporters of gorilla conservation will bear in mind that it too is only a stopgap solution to “the much bigger issues of deforestation due to population encroachment, logging, and bushmeat hunting and other illegal acts.” In the meantime, she will make sure that her young charges have the best possible chance to contribute to the survival of their species.