Orphaned Gorilla Field UpdateAfter the saddening events of 2007, where a number of mountain gorillas were killed due to civil unrest in the Congo (DRC), everyone in Rwanda and DRC is hoping that 2008 will be a better year. Unfortunately the year started off badly, with the confiscation of two Grauer’s gorillas (eastern lowland gorillas) near the town of Beni, DRC, on Jan. 2. 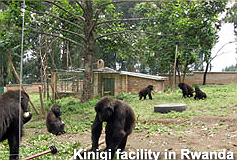 The two youngsters, a female around 3 years old and a male around 4 years old, had been through an extremely hard time at the hands of their captors and were in very poor condition. Unfortunately, the male (named Vulmilia by local authorities) died 11 days after the confiscation, despite heroic efforts by Mountain Gorilla Veterinary Project (MGVP) veterinarian Eddy Kambale-Syaluha and experienced orphan caretaker, André Bauma. It appears that Vulmilia had been in captivity for quite some time, since he had developed rickets, which takes 6 to 8 months to develop and can be attributed to poor diet. The female, Mapendo, has since been moved to a DFGFI facility in Goma. At the time of writing, she is eating well and responding positively to her caregivers. 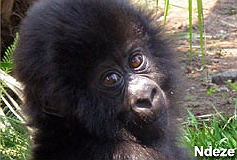 Ndakasi and Ndeze, two orphaned mountain gorillas resulting from last year’s tragic killings in Congo, are also housed in Goma, in another special facility. Considering the young age at which they came into our care (2 months and 5 months respectively), these two have come along in leaps and bounds in terms of both physical health and behavior. After arriving in June and July, these gorillas spent a period of quarantine alone before they were introduced to each other. Since then they have become inseparable and spend 24 hours a day together, along with their caregivers, and play together regularly. 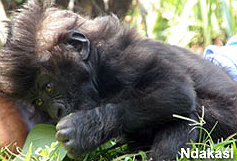 Ndakasi is considerably behind Ndeze developmentally, being 2 months her junior and also having suffered some serious setbacks, including a life threatening bout of pneumonia last year. However, this does not stop her from trying to muscle in on any attention that Ndeze is getting. Ndeze takes it all in her stride and is happy to spend her time with her new little sister, especially as she knows that she always has the upper hand! When not chasing each other around or playing rough and tumble games, both are quite content relaxing with their surrogate mothers or exploring their environment, an activity that is sure to keep their caregivers on alert as the toddlers try to get into mischief with anything they can find. All of this bodes well for their future as they are developing into normal, curious, mischievous little gorillas. 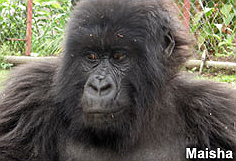 The group of eight orphans housed at the Interim Quarantine Facility in Rwanda, jointly managed by DFGFI and MGVP, continue to develop as a group. Maisha, the now 6-year-old female mountain gorilla, remains dominant, due to her innate understanding of gorilla politics, her likeable personality and often sheer force of will! For the most part, all eight are getting along well, although food is always a bone of contention, with the more dominant animals expecting more than their fair share! However, aggression during these times has decreased drastically as they have consolidated as a group and the less dominant animals are learning that they must stand up for their rights if they are to get some of the tastier treats on offer. It has been extremely satisfying to watch this group develop and become socially stable, especially for those animals that were without contact with other gorillas for a long period of time and for whom adjusting to being a gorilla again was quite traumatic!
Submitted by Simon Childs, DFGFI’s Confiscated Gorilla Care Manager