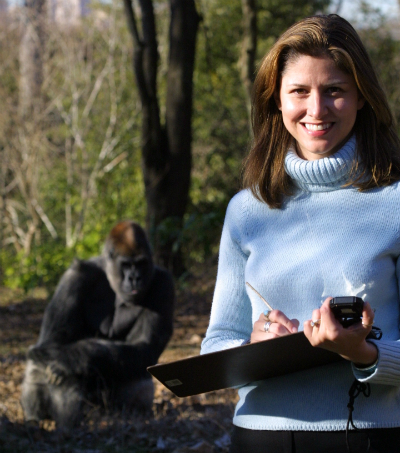 Many scientists have found that certain personality traits may help people stay healthy and live longer, though they have yet to understand how this works. Now, the phenomenon has been observed in gorillas, and the Dian Fossey Gorilla Fund’s Vice President and Chief Scientist Tara Stoinski, Ph.D. was one of the researchers. Stoinski studies gorillas both at the Fossey Fund’s Karisoke Research Center in Rwanda and at Zoo Atlanta, where she also holds a staff position.

The report, “Extraversion predicts longer survival in gorillas: an 18-year longitudinal study,” was published this month in the U.K.’s prestigious journal Proceedings of the Royal Society. A team of four scientists, from Edinburgh and Chicago as well as the Fossey Fund, looked at the personality dimensions of 283 captive western lowland gorillas in 42 zoos and their survival histories over an 18-year period. Of the four traits considered: dominance, extraversion, neuroticism and agreeableness, extroversion was associated with longer survival – regardless of other factors such as gender, age, and whether the gorillas were born in the wild.

“We know that for some other primate species elements of personality are associated with better health outcomes — for example, more sociable rhesus macaques have a better immune response under stressful situations. Now, we find the link between health and personality is true of captive gorillas as well,” says Stoinski. “We can only speculate at this point about how the association works. We don’t know if, as in the macaques, extroversion strengthens immune response, or if it helps the animals form social ties that buffer them from stress, or if it reduces cardiovascular disease – the main cause of death in captive gorillas.”

No association was found between length of life and the gorillas’ degree of neuroticism, dominance or agreeableness. The study concludes that the association between extroversion and long life may have been present in the common ancestor shared by humans and gorillas.

Stoinski and other Fossey Fund researchers are also engaged in ongoing studies of wild mountain gorilla personalities, which examine the relationships between individual gorilla personality and a variety of behaviors and life history patterns.