After a month of cold temperatures, frequent rains and thick mist on Kimbagira, the 45 gorillas of Pablo group have finally moved down into the bamboo zone. It was a beautiful day for their arrival into the lower altitudes of the park; the sun shone brightly and the gorillas appeared to relish the warmer weather. Fossey Fund Karisoke researcher Dr. Winnie Eckardt was with the group when they arrived in the bamboo belt at 12:30 p.m. this afternoon, with dominant silverback Cantsbee in the lead. Eckardt reported that the gorillas fanned out, in search of the best patches of bamboo shoots. The youngsters of the group were busy engaging each other in games of chase and other playful activities and the adult gorillas happily feasted on succulent shoots nearby. The scene was a stark contrast from the previous week's observations – when every gorilla was huddled and shivering in the cold rain, high up on Kimbagira. 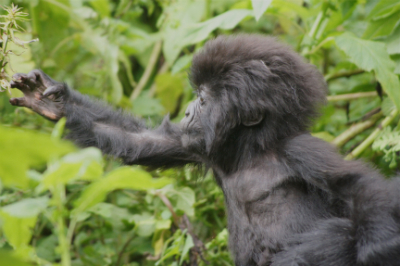 Yesterday evening, Karisoke researcher Stacy Rosenbaum reported that the group was on the move and covered a substantial distance in a short period of time, stopping only intermittently to rest. By the time her four-hour data collection period came to an end, Pablo group was closing in on the bamboo zone. It was clear that their two-day journey down into the lower level of the park was driven by a single motivation: bamboo.

The group's closer proximity to the edge of the park gives a much needed reprieve for the Fossey Fund's Karisoke trackers of Pablo group, who have trekked hundreds of hours of steep terrain in the last month in order to monitor the gorillas every day. Without a doubt, gorillas and field staff alike will enjoy the break from the frigid weather of the higher altitudes in the coming weeks.

However, the bamboo belt is a limited area, and with the addition of a large group such as Pablo, the Fossey Fund anticipates an increase in intra-group interactions. Three groups, Kuryama, Isabukuru and Bwenge, are all ranging near the Pablo gorillas at the moment, bring the total to 101 gorillas moving within a close proximity to one another. We hope that the remainder of the bamboo season is free of aggressive incidents, but acknowledge that this is highly unlikely. The Fossey Fund's Karisoke field staff will be monitoring the situation closely. Please stay tuned!