Among the illegal activities that sometimes occur in the forest where the mountain gorillas live, the setting of snares is the most common. These are generally intended for other animals in the forest, such as antelopes, but present a danger to the gorillas and other animals as well. DFGFI and park anti-poaching patrols and gorilla trackers detect and deactivate snares frequently (65 just in July). Despite this effort, gorillas sometimes get trapped and when it happens the release process can be long and dangerous for both gorillas and humans. 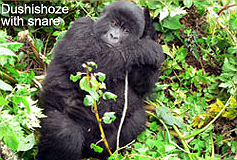 In the month of July, two gorillas from Pablo’s group got caught in snares. In the first case the gorilla succeeded in freeing himself but in the second instance, the gorilla had to carry the rope for three days before being freed. On both occasions, the gorilla group demonstrated great intelligence and cooperation, probably as a result of bad experiences in the past.

The first case happened on July 2, when Iyambere, a 6-year-old male, put his foot into one of these antelope traps. The unlucky gorilla started screaming and alarmed the entire group. Several group members ran to the scene and all expressed excitement and anger with a series of loud vocalizations, and various attempts to prevent other individuals from going too close. Umuco, Iyambere’s mother stayed close to him. Cantsbee, the dominant silverback, started to display next to the snare, trying to keep everybody away from the danger. Iyambere kept screaming the entire time and jumped wildly trying to get the snare off his ankle. Finally he bit the rope through and released himself. He also managed to remove the remainders of the snare from his ankle.

On the second occasion, on July 24, Dushishoze, a juvenile male, got caught in a snare with his right arm. His screams alerted the whole group. As they arrived near him, Dushishoze was pulling on the rope trying to free himself, but this was making the noose tighter around his arm. Twihangane and Kureba (black-backs) also tried to help, pulling Dushishoze by the other arm. The rest of the group was surrounding the scene and watching, with most of them chest beating. 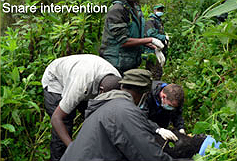 Eventually, Dushishoze became tired due to all the effort and probably the stress, and he stopped struggling. At this time, our Karisoke trackers were able to approach Dushishoze and cut the rope loose from the bamboo section. When Dushishoze screamed at his rescuers, the whole group ran towards them, but fortunately they were not aggressive, and Dushishoze walked away with the rope around his arm. The group then soon started moving. The following days, Dushishoze was observed doing his normal activities but still dragging the rope with him, so a veterinary visit was arranged.

On July 26, veterinarians from the Rwandan park service (ORTPN) and the Mountain Gorilla Veterinary Project joined Karisoke staff in approaching Dushishoze to try to remove the remaining rope. That day Dushishoze stayed close to his mother Intwali, and did not move more than 2 meters from her. The veterinarians proceeded to anesthetize him and cut the rope while our trackers protected them and kept the other gorillas of the group away. The situation was very tense and many gorillas including Intwali, Dushishoze’s mother, were screaming at the humans, unable to appreciate our good intentions, of course.

The frightened group then proceeded to run away and little Dushishoze was left behind. It was necessary to transport him close to the group before leaving and allow him to rejoin the group on his own once he woke up from the anesthesia. The whole process lasted 8 hours. The next day, Dushishoze was observed within the group without any problems. Intwali showed signs of uneasiness when she saw trackers, however. She grabbed Dushishoze, put him on her back and moved away, but was observed to be more relaxed later on.