The month of August brought dynamic changes to Pablo’s group, for many years the largest group of mountain gorillas observed by the Dian Fossey Gorilla Fund International’s Karisoke™ Research Center. 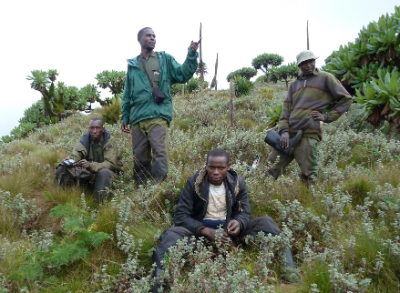 First, on Aug. 16 Fossey Fund trackers discovered that three adult males — silverbacks Twihangane and Gushimira and blackback Irakoze — had left the group to strike out on their own and travel together independently. The exact moment of the dispersion is unknown, but the three bachelors were located four days later on Aug. 21, as a result of an intense search effort led by the Rwandan Development Board (RDB) and the Fossey Fund.

Looking for dispersed gorillas is a complicated operation. It requires a large number of experienced trackers to cover a vast stretch of land. The difficulty of detecting gorilla traces under severe weather conditions in dense vegetation further complicates the operation. However, the Karisoke field staff has considerable tracking experience and there have been few instances when they did not find dispersed gorillas. During such a search, support from the RDB field staff is essential to maximize the chance of locating the gorillas and allow the Fund’s routine field operations to carry on uninterrupted. As the three males moved further up the mountains, their tracking and observation became increasingly difficult for the field staff. 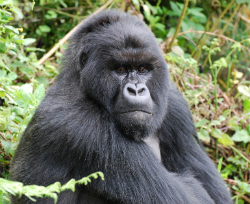 Fortunately, on Aug. 21 the three bachelors were discovered high up on Karisimbi Volcano, appearing calm and feeding as normal. Tracing back their tracks revealed that they had been traveling in a different direction from that of Pablo’s group. This suggests to our field staff that the three males were not looking for an opportunity to rejoin their large former group.

During the search, three nest sites were located. At each site, the smallest nest has consistently been at least 50 to 100 meters away from the other two. The smallest nest belongs to Irakoze who, at 11 years old, is the youngest male traveling with the bachelor group. The location of Irakoze’s nest may indicate that he is not integrating smoothly into the new group with 14-year-old silverbacks Twihangane and Gushimira. All-male groups are rare among gorillas, although the historic silverback Titus grew up in one for some years after his natal group broke up while he was a juvenile. We look forward to more observations of the new group’s behavior.

Pablo’s group experienced another significant change when eight year old female Nyandwi transferred to Inshuti’s group during an interaction between the two groups on Aug. 21. Nyandwi is at an age when female gorillas often reach sexual maturity and will begin to search for the best mating opportunities. This search can occasionally lead a female gorilla to leave her natal group. 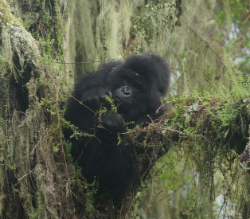 The structure of Pablo’s group may explain Nyandwi’s departure. Nyandwi is the sister of dominant silverback Cantsbee. In addition, she is related to 50 percent of the mature males (more than 8 years old) in Pablo’s group. This close family relationship with potential partners seems to explain her move to Inshuti’s group.

As is seen with many female transfers, this one set off an intense two-hour interaction between the two groups as Pablo’s silverbacks vehemently resisted the shift. During the interaction, Pablo’s dominant silverback Cantsbee and second-in-command Gicurasi displayed furiously and engaged in a physical fight with the opposing group’s silverback, Inshuti.

Considering his advanced age, the field staff found it surprising that Cantsbee actively participated in the fight, as he both dealt and received powerful blows from Inshuti. Even so, it was beta male Gicurasi who played the strongest role, facing Inshuti at close range in strut stance posture (a confrontational posture taken by silverbacks). The two silverbacks exchanged many loud chest beats and powerfully pounded the surrounding ground in their displays. They also grabbed at branches and hit each other in a typical sequence of behaviors accompanied by hoots and loud screams.
During the dominant male’s displays, the other group members maintained a safe distance behind their respective silverbacks. The actual transfer finally occurred when Nyandwi approached Inshuti after the first hour. Inshuti was successful in keeping her within his group as he continuously displayed and pushed her away from Pablo’s silverbacks. The interaction came to an end when Inshuti began leading his group and their newly acquired female away, prompting Pablo’s group to withdraw in the opposite direction. 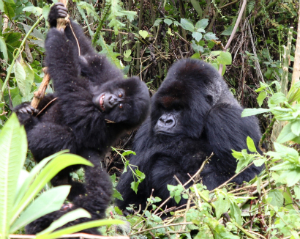 Nyandwi’s transfer, accompanied by the dispersal of the three adult males, indicates that the group is facing a difficult phase. While lead silverback Cantsbee still maintains his dominance, sexual activity is limited to the five younger silverbacks within Pablo’s group. Cantsbee is the oldest gorilla in the research groups and is the only remaining gorilla that was born in the 1970s and known to (in fact named by) Dian Fossey. However, the field staff doesn’t believe that Cantsbee’s reign will end soon. Pablo group’s team leader, Francois Xavier Ndungutse says “Even if Gicurasi is getting stronger and claiming the majority of the sexual activities, Cantsbee is still very strong and, as he is followed by most of the females, is still the definitive leader of Pablo’s group.”