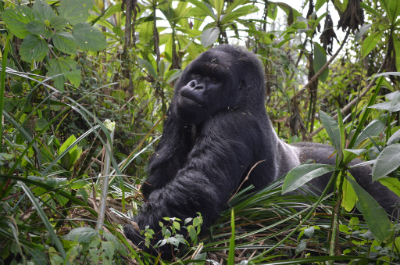 Fossey Fund field staff were surprised this weekend by an interaction between the two largest gorilla groups in the Virungas — Pablo’s group and Susa’s group (one of those habituated for tourism).

Among the Fossey Fund-monitored groups, Pablo’s stands out as a difficult one to track, since there are so many gorillas to account for — 37 in total — and they often range at high altitudes, far from the boundary of Volcanoes National Park. On the morning of Aug. 10, when Pablo’s trackers reached the group, they found it in the heart of Susa’s group’s home range, on the western side of Mount Karisimbi. Susa’s group is the largest group in the Virungas, with 38 individuals, and is monitored by the Rwandan park authority, the Rwandan Development Board (RDB).

The interaction lasted three hours. By the end, six females had transferred between the groups.The trackers observed many displays and fights among the silverbacks, but fortunately they could see only superficial wounds on Gicurasi, who is second in command to Cantsbee in Pablo’s group. Although he is not the dominant silverback, Gicurasi seemed to be more involved in the interaction than Cantsbee, who at 34 years old is becoming quite elderly for a silverback. Veronica Vecellio, the Fossey Fund’s Gorilla Program manager, expressed her concern for Cantsbee, saying, “ Pablo’s group has gone through many changes recently, decreasing from 43 gorillas at the beginning of the year to 37 and now, again, more losses.”

Fossey Fund staff were happy to see that the silverbacks had made it through the interaction with few injuries, but were concerned about two infants who had been left behind by females Afrika and Umuco. Afrika’s infant, Indamutso, was of particular concern because she is unweaned at the age of 2 and therefore still very dependent on her mother. However, Fossey Fund Research Associate Winnie Eckardt, Ph.D., believes that the infant may be able to cope without her mother. “She is almost 33 months old, an age at which mountain gorilla infants have been seen being weaned,” says Eckardt. “But of course the sudden weaning must be traumatic, and I am sure that this poor girl has a tough time ahead. Luckily, Pablo’s group is a big group and I remember her being very lively, curious, open and tough — being far from mum and playing with the other youngsters early on. Let’s hope she can bond quickly with somebody.” Female Umuco also left behind a 3-year-old infant, Umwari, but at this slightly older age, the infant has a much better chance of surviving without its mother.

Pablo’s group has undergone many changes in the past few months, and the Fossey Fund remains curious about how the group dynamics will develop. For example, neither Eckardt or Vecellio completely understand why Umuco would have left Pablo’s group, since she was quite dominant in the female hierarchy and will now have to struggle for a good position in Susa’s group.

Vecellio suspects that the recent loss of a younger infant may have had something to do with it. “I think losing an infant had a big impact on her as she did not let it go for days after the death.” In the past, the Fossey Fund has observed other high-ranking females transferring to new groups after losing infants.

What will the future hold?

The two groups remained within 600 meters of each other throughout the weekend, with a couple of small subgroups forming as well. Both infants from Pablo’s group appeared to be adjusting to the absence of their mothers. On Aug. 11, Vecellio said, “Pablo’s group was very calm and compact. Infants Indamutso, the 2-year-old, and Umwari, the 3-year-old, were apparently fine. They were playing as usual with the other youngsters in Pablo. During resting time, Indamutso was resting with silverback Gicurasi and female Mitimbili, while Umwari was resting with Cantsbee and female Gutangara. This doesn’t surprise me as we have observed several times silverbacks taking care of infants after a premature separation from their mother. It is interesting to confirm this pattern this time as well.” In fact, from nest counts, field staff believe that at least one infant shared a nest with a silverback for the night.
Since Sunday, it appears that all of the females who transferred out of Pablo’s group have returned, except for Afrika, but the dynamics could still change. The Fossey Fund, in collaboration with RDB, will continue to watch Pablo’s group and Susa’s group closely in the coming weeks to see how all of the gorillas fare. Given the long relationship that the trackers and researchers have with many of the gorillas after observing them for years, interactions like this can be stressful for Fossey Fund staff too as they hope to see good outcomes for all of the gorillas. 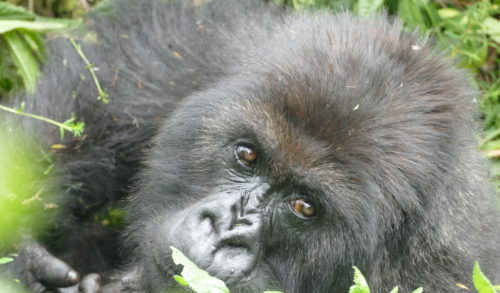 The Dian Fossey Gorilla Fund is sad to announce that Poppy, the last living gorilla featured by famed primatologist Dian...