Silverbacks Rukundo, Gicurasi in and out of Pablo’s group 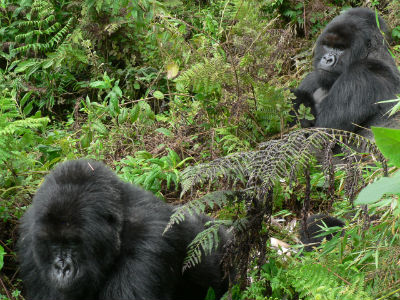 The bamboo season is coming to an end and the mountain gorillas we monitor from the Karisoke™ Research Center are moving back uphill. Pablo’s group is moving toward the subalpine zone of the Kimbagira area on the southern slope of the Karisimbi volcano. This zone is the core of the group’s home range during the entire year. Because of the difficult topography and prickly vegetation in this area it was very hard to observe all the gorillas during the last days of 2010. For that reason, the absence of silverback Gicurasi and female Mukecuru did not cause any concern on Dec. 22, as the two gorillas may have just been hidden under the bushes. However, our tracker team intensified their search on the following day and found two fewer nests than expected at the night site, proof that the absence of the two gorillas was real.

Pablo’s group includes six silverbacks, with Gicurasi ranking second after dominant Cantsbee. Since the beginning of the year the young silverback has tried to exploit his high rank to persuade females to stay close to him and to give in to his sexual approaches. He was the main actor of all sexual encounters recorded in 2010 (41 percent of all copulations). It was not just an accident that the two gorillas were missing together, as female Mukecuru has been his main sexual partner. Due to his old age, dominant silverback Cantsbee tolerates younger silverbacks’ sexual activities, as the presence of five other adult males guarantees group protection and cohesiveness. 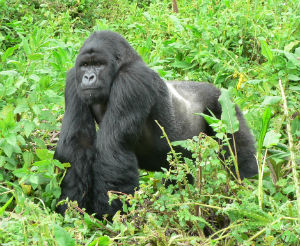 The major surprise on the day that Gicurasi went missing was the presence of silverback Rukundo, who has lived as a solitary male since he left the group in March. Rukundo may have taken advantage of Gicurasi’s absence to revisit his natal group. His arrival at the group’s periphery did not disturb the usual activities and he was peacefully accepted and normally approached by some gorillas. However, he then broke the peace by chest-beating and pulling vegetation in a show of power. In response, two nearby blackbacks and two silverbacks charged him, screaming. Rukundo was then obliged to leave the group. On the following days he was seen on the group’s trail, a few meters away.

Rukundo and Gicurasi are the same age and do not get along well together, as both had competed for the second rank under Cantsbee. It was evidently to avoid conflicts that Rukundo decided to become a lone silverback on last March, and he had not been seen since then.

Gicurasi’s first attempt to form his own group did not last long, as he and Mukecuru rejoined Pablo’s group after three days of traveling independently. Cantsbee did not show any interest in the young silverbacks’ movements and did not react either to Gicurasi’s departure or to Rukundo’s visit.

Because of the changes in dominance and the group splits that have been observed in recent years due to the advanced age of dominant silverbacks Titus and Shinda, a change in Pablo’s group is expected in the near future, as leader Cantsbee, now 32 years old, approaches the life expectancy of male gorillas.