Our trackers who follow Pablo’s group noticed today that the gorillas were crowding around 11-year old female Ishema. They all looked at her curiously, including her 3-year old youngster, Imfura. Soon trackers discovered the source of all the excitement—Ishema was holding a new infant. Trackers watched as Ishema cleaned the newborn, licking off the fluids from the birth. That Ishema was still cleaning the infant leads us to believe that it was born sometime this morning. 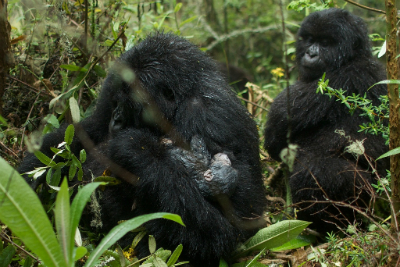 The new infant is Ishema’s second. Fossey Fund field staff have been wondering whether Ishema might be pregnant, since her first infant, Imfura, was weaned quite some time ago. It is difficult if not impossible to tell when a gorilla female is pregnant without doing a laboratory test. Their typically large bellies hide any visual signs.

This new birth brings Pablo’s group up to 44 members. Pablo’s is by far the largest group currently monitored by Fossey Fund. We are thrilled to welcome the new infant into the world and will keep a close eye on both the infant and Ishema, as infancy is the most dangerous period in a mountain gorilla’s life, and the first few weeks are critical in determining both the mother's and the infant’s health. We look forward to seeing Ishema’s infant named at next year’s Kwita Izina ceremony in June.