Since 1991, the Dian Fossey Gorilla Fund has had a very special partnership with Partners In Conservation/Columbus Zoo and Aquarium (PIC). This organization has helped fund not only the ongoing mountain gorilla protection activities of the Fossey Fund in Rwanda, but also significant education and outreach programs in Africa. PIC raises funds through the Columbus Zoo each year, to support conservation and humanitarian projects in Rwanda and the Democratic Republic of Congo.

A new project started in 2014 by PIC and implemented by the Fossey Fund is the Bisate Learning Center, a library and computer facility built near the Bisate Primary School. Now open to the community and officially handed over to the headmaster of the school in July, this Learning Center provides access to books and computers for nearly 20,000 people, most of whom have never had such resources available. Children are now able to use computers for the first time and are learning basic skills during several sessions of training provided by Fossey Fund staff. And, students at the Bisate Primary School receive daily computer instruction from their computer teacher. 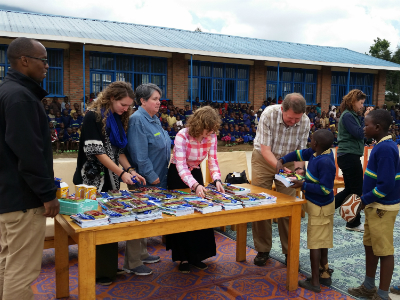 Also in July, PIC distributed school supplies to more than 2,000 pupils, something that has now become an annual tradition and a big celebration at the Bisate School, followed by presentations about the year’s gorilla events and an annual party at the Fossey Fund’s tracker base in Bisate. PIC also distributes gifts to Fossey field staff each year, including socks that are now a basic staple of their field outfits.

“The PIC team provides the field staff with socks and other items because we appreciate that these men and women dedicate their lives to protect the mountain gorillas,” says PIC’s Director Charlene Jendry.

The visit and support of PIC are greatly welcomed and enjoyed by Fossey Fund field staff each year. “The relationship with PIC is special for their individual involvement in people’s lives. It’s not only a donation, but a physical and tangible affection for the staff in Africa,” says Fossey Fund Gorilla Program Manager Veronica Vecellio.

This work is especially important because it connects everyone together, says Karisoke Director Felix Ndagijimana. “This is an important contribution to conservation and to connect people from different countries,” he says.

PIC was founded by Charlene Jendry, who comes with her colleagues for several weeks each year to Rwanda to meet with the Fossey Fund and other conservation partners, and to interact with field staff and local communities. Jendry’s connections to the Fossey Fund go back even further. She met Dian Fossey in the 1980s, while a gorilla keeper at the Columbus Zoo, and later spent six months studying gorillas at Karisoke. Jendry and three Columbus Zoo docents founded PIC in 1991, with support from then zoo director Jack Hanna. Their first efforts helped the Fossey Fund rebuild the Karisoke Research Center after war damage and since then have expanded greatly.

In addition to direct support for the Fossey Fund’s mountain gorilla protection work, and the education activities mentioned above, PIC has also helped the Fossey Fund implement a conservation education program in six primary schools in Rwanda near the Volcanoes National Park, and provided support for Rwandan undergraduate and graduate staff members and students to pursue their studies.

Jendry says, “PIC believes that offering educational opportunities can make a difference in the lives of people of all ages, and demonstrates to local people that PIC and the Fossey Fund are committed to helping people as well as protecting gorillas.”

Fossey Fund field staff feel great affection for Jendry and all of the PIC “family.” “It’s not just about what they give but especially how they give it,” says J. Damascene Hategekimana (known as “Fundi”), Fossey Fund field operations coordinator for more than 20 years. “We look forward to their visit every year and celebrate them with a party!”

Jendry says, “Spending time with the Fossey Fund staff is one of the highlights of PIC’s annual site visit. We receive updates on the gorilla groups monitored by the field staff, and we enjoy the fellowship that has deepened though our long-term partnership. Together we are helping the conservation of gorillas and improving the lives of local people. The Columbus Zoo continues to support gorilla conservation through our successful 24-year collaboration with the Fossey Fund.”