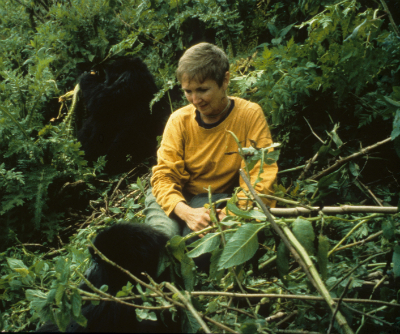 When a female gorilla made eye contact with Charlene Jendry at the Columbus Zoo and Aquarium, Jendry knew she had found her life’s work. Within two years she moved from zoo docent to gorilla keeper. This in turn led to a unique long-term partnership between Jendry; the zoo; the Columbus, Ohio, community; and the Dian Fossey Gorilla Fund International that helps sustain our work protecting gorillas to this day.

During her early career as a gorilla keeper Jendry was able to spend four days with Dian Fossey, who came to Columbus on a book tour and stayed to observe the good work Jendry and her colleagues were doing at the zoo and share information about gorillas. “She was an amazing teacher,” said Jendry. Eight years later in 1992, Jendry spent six months studying gorillas at the Karisoke™ Research Center that Fossey founded.

With support from Jack Hanna, who was director of the Columbus Zoo at the time and who later joined the Fossey Fund board, Jendry and three zoo docents started Partners In Conservation/Columbus Zoo and Aquarium (PIC), which contributes to wildlife conservation and related community development projects. They began by helping to fund repairs to Karisoke’s buildings that had been damaged by Rwanda’s civil war in 1991. 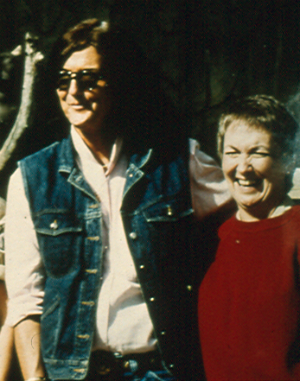 “We sold T-shirts to raise that first contribution,” Jendry recalls. Karisoke was destroyed two more times and the headquarters moved to a nearby town, but the partnership with PIC took root and has grown ever stronger over the past two decades – thanks in large part to Jendry’s efforts and the Columbus Zoo’s support. She currently serves as project director for PIC, a position funded by the zoo.

Now PIC raises funds from an annual “Rwandan Fete” at the zoo that draws more participants each year and always sells out, as well as from individual donors and other groups in the Columbus community, and from sales of crafts produced by 16 cooperatives that PIC supports in Rwanda. This year’s Fete will take place on Saturday, September 17.

PIC’s contributions to Karisoke range from ongoing donations for trackers’ supplies to helping undergraduates conduct research, to supporting the Bisate School that neighbors Volcanoes National Park with funding for English classes, a clean water system, educational supplies and even bicycles for the teachers. For the past two years, PIC has funded a local conservation education program designed by Disney’s Animal Kingdom and conducted by Karisoke’s Joseph Karama at four primary schools near the park. PIC also pays salaries for a Rwandan and a Congolese veterinarian with the Fossey Fund’s partner, the Mountain Gorilla Veterinary Project, and since 1998 PIC has supported conservation projects in the Democratic Republic of Congo.

PIC provided “critical support” during the 1994 Rwandan genocide, contributing to the salaries for Karisoke’s African staff, who remained at their posts with only a brief period of forced exile. Jendry even returned to Rwanda herself in early 1995 to visit Karisoke and an orphanage PIC was funding there. The troubles were so recent that car headlights had to be used to light the way for planes to land at the airport. “Maybe it wasn’t the best time to visit,” she says, but she has returned every year since then, representing PIC. Last month Jendry travelled to Rwanda for another visit to Karisoke and other PIC beneficiaries there.

PIC shares the Fossey Fund’s belief in the importance of programs to help people who share the gorillas’ ecosystem. “When I visited in 1992, a poacher who was in a group apprehended by park guards was brought to Karisoke for treatment of his injuries,” she recalls. “From the comfort of my home in Ohio I had considered poachers the enemy, but when I looked into his eyes I really knew that this man was hunting in the forest for game because he had no other options. That told me that we needed to address the needs of gorillas but also provide economic alternatives to people who lived near the park. It was a new concept then.”

PIC states that they approach conservation “holistically.” “By collaborating with conservation partners who provide local populations with education, skills and liveable-wage jobs, PIC is able to help indigenous people become directly invested in saving their environment, which in turn helps to conserve gorillas and other vulnerable wildlife,” according to their website. 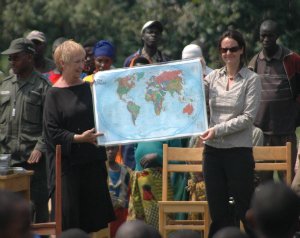 Jendry also stresses the benefits of long-term partnerships. “The Fossey Fund is close to my heart because that’s where it started,” she says. “In 1992 I formed friendships with the staff and saw first-hand what they did to save those animals. Those friendships are still ongoing, as is my friendship with Karisoke Director Katie Fawcett, whom I met in 2002. When I make my annual visits we talk about the work that’s been done, and that helps fund raising. I truly believe that’s what makes this partnership so strong. PIC remains extremely honored to partner with the Fossey Fund, to help the conservation of gorillas and support the staff who work with them.”

The feeling is mutual, according to Fawcett, who says Jendry’s passion and dedication and her regular visits, even during times of insecurity, have been “a source of constant support and encouragement for the staff at Karisoke and the local communities where we work. Her friendship and respect for the people she works with is central to the success of the partnership between PIC and the Fossey Fund to protect the critically endangered mountain gorillas.”