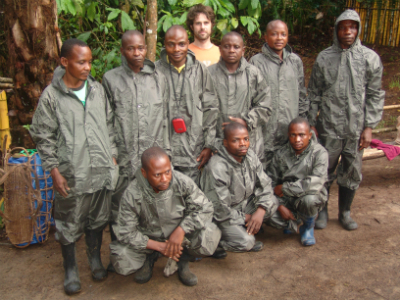 We have been getting questions about how a recent gift to the Jane Goodall Institute relates to the Dian Fossey Gorilla Fund's work in the Democratic Republic of Congo (DRC).

The Fossey Fund is part of a consortium of several organizations working in the DRC to save wildlife and habitats. In 2011 we participated with the Jane Goodall Institute, Gorilla Doctors, Wildlife Conservation Society and others in the ICCN (Congolese national park service) Conservation Action Plan (CAP) for Great Apes in eastern DRC. We contributed years of our field data collection. This was used to establish the priority survey areas of Grauer's gorillas and chimpanzees for groups working in the region.

We are glad more organizations are becoming involved in the effort to save this little-known species. We gave the early alarm that Grauer's gorillas were threatened in 2000 when we catalyzed the creation of the first officially recognized community-based reserves in the area, and conducted early surveys of the Maiko and Tayna areas. Later, we supported the establishment of a nature conservation training center, provided assistance to establish a network of community-based nature reserves spanning 12,000 square miles and supported several community organizations that helped people in the region. Given the presence of chimpanzees sharing the habitat with gorillas, the Jane Goodall Institute has been collaborating with our efforts since those early days, focused mainly on environmental and conservation education and livelihoods.

Since the Great Ape Action Plan was published in 2011, we have focused on establishing the field research capacity needed to study and protect Grauer's gorillas and their forest habitat in the long term, following the model of the Karisoke Research Center established by Dian Fossey in 1967 and operating successfully today. The new field station in Biruwe, Walikale territory, is a strategic hub for forest camps used by field teams following gorillas in a 1,000 square kilometer tract of intact forest. Deep in the forest, data collected are sent via satellite uplink to our state-of-the-art research center in Rwanda, where they are processed and used to guide further exploration. Several research projects are in the planning stages. This work is being made possible through a $1 million donation from Ted Turner, the DKT Foundation and significant commitments from other individuals and support from our members.

We are pleased that Mr. Allen and his foundation have committed to support the actions outlined in the CAP for Great Apes in eastern DRC, which will help gorilla sanctuaries, add more protection for Grauer’s gorillas and contribute to the research being done that will impact the survival of Grauer’s gorillas. This gift is a significant boost to the efforts underway by local communities, governments, nonprofits and funders who also want to save gorillas.