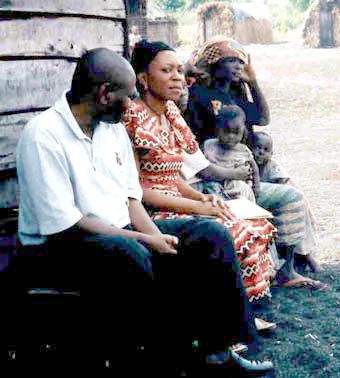 Amidst the chaos of war in his native Democratic Republic of Congo (DRC), Pierre Kakule Vwirasihikya organized local chiefs to protect the rich and unique wildlife of their homeland, creating private, protected areas to help gorillas, chimpanzees, forest elephants and the other rare and unique species living there.
The Tayna Gorilla Reserve was the first of its kind in DRC, and has since inspired the creation of several more community-based preserves. All are now supported by DFGFI and its partner Conservation International, along with several national park areas, totaling more than 7.4 million acres.
On Oct. 17, Kakule was recognized for his courageous conservation efforts and presented with the prestigious 2005 Conde Nast Traveler Environmental Steward Award, for creating the Tayna Reserve and the Tayna Center for Conservation Biology, the first university in DRC devoted to conservation.
Both are funded by the partnership of DFGFI and Conservation International.
“We knew we had to protect the land or we would lose the forest forever,” says Kakule. “People here are very attached to the forest and animals. It was our initiative, not the government's, to preserve it instead of cutting it for farms or mining.”
This part of the Congo is home to the eastern lowland gorilla (known more properly as Grauer's gorilla), which was believed to be facing extinction during the war in eastern DRC from 1998-2003.
New surveys by DFGFI have found indications of larger Grauer's gorilla populations than previously suggested, showing the effectiveness of conservation efforts like those at Tayna, and the opportunity for further preservation efforts.
The area also contains a high degree of biological richness, including chimpanzee, forest elephant, Nile crocodile, Congo peafowl, Congo bay owl, okapi and leopard.