Poachers' Snares Up in Flames

The Karisoke trackers were able to cut down 2000 snares over a two-year period. The poachers' snares are intended for bushbuck and buffalo, but gorillas often get caught in them. The snares are burned so that there is no possibility of their re-use. 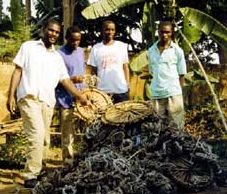 Karisoke trackers Mpiranya, Hitayezu, Jean-Bosco, and Jean examine and burn a mountain of snares. The large, round traps are intended to capture buffalo while the remaining rope snares are intended for bushbuck and duiker. Gorillas can also get caught in these potentially deadly traps.