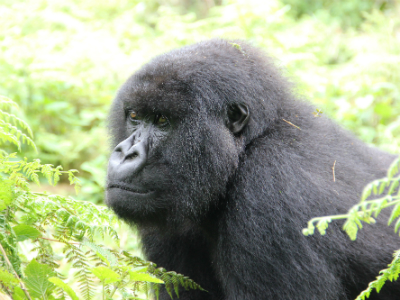 Tool use by gorillas and other great apes that live in captive settings has been well documented and seen in a variety of contexts. However, tool use (meaning an external object used as an extension of a mouth, beak, hand or claw) by great apes in the wild is reported less frequently and gorillas were the last to be documented doing so. The first cases were reported in 2005. They involved western lowland gorillas in the Republic of Congo, one of whom appeared to use a stick to determine the depth of a waterway while crossing it. The other was seen using the trunk of a dead shrub to cross some swampy ground.

Then, in 2013, Fossey Fund scientists published a paper in the journal Behavioural Processes, describing the use of a bamboo stem by an adult female mountain gorilla to presumably serve as a “ladder” for her offspring, helping him climb up a pile of vegetation to reach her. This observation, of mother gorilla Tamu, was made in 2010 during a study focusing on feeding ecology among the mountain gorillas led by former Fossey Fund/Karisoke scientist Dr. Cyril Grueter for his post-doctoral research.

And, late last year, scientists published a report about apparent tool use by a young mountain gorilla in Rwanda’s Volcanoes National Park. Published in the American Journal of Primatology, the report was authored by veterinarians Jean-Felix Kinani of Gorilla Doctors and Dawn Zimmerman of the University of California, Davis.

This observation of tool use occurred when a team from Gorilla Doctors was conducting a routine health check of a mountain gorilla group that is habituated for tourism, called Kwitonda group. Silverback Kigoma had just collected some ants to eat, from a hole in the ground, but quickly pulled his hand out and moved away while shaking his arm, seemingly because the ants were biting him. A juvenile female gorilla (named Lisanga) observed this and proceeded to approach the hole and observe the ants going in and out. She then put her hand in the hole but also quickly pulled it out, again probably due to the biting of the ants. After this, she was then seen taking a stick from the ground, putting it into the hole, withdrawing it and then licking off the ants that were on it.

There have been nearly five decades of intense monitoring of wild mountain gorillas, as initiated by Dr. Dian Fossey and continued on a daily basis by the Fossey Fund, local park authorities and other groups. Yet, there are only a handful of observations of possible tool use in wild gorillas. However, these instance suggest that wild gorilla are capable of using tools, even though they may not generally have a need to do so.