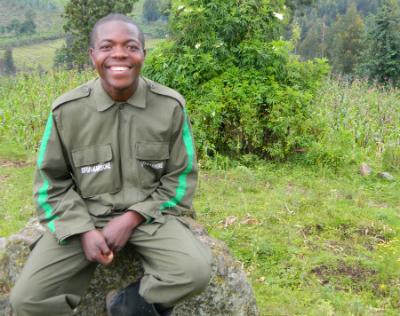 Clement Kagaba Tuyishime is one of the Dian Fossey Gorilla Fund’s newest, youngest and most-promising mountain gorilla trackers. Fossey Fund trackers provide daily monitoring and study of some 11 groups of mountain gorillas in Rwanda’s Volcanoes National Park, a practice started by Dr. Dian Fossey herself in the late 1960s. In addition to helping provide protection for the gorillas, Fossey trackers also record information about each individual gorilla and their groups, collecting data that now constitutes one of the largest and longest-running databases on any species.

Clement was one of the few hired from among 396 applicants in 2013, after several weeks of training. He is 25 years old and was born in Kinigi, a town close to Volcanoes National Park. Clement started as a tracker in the Pablo group of gorillas, which is the largest group we follow. It is named after a former silverback (Pablo) who once led the group and who was originally observed by Fossey herself. Recently Clement was assigned to the newly formed group led by silverback Musilikale, which was formed from the split of Pablo’s group.

Serving as a gorilla tracker is an unusual and demanding job, requiring a high level of physical fitness and devotion. Here are some thoughts from Clement as he begins this special career saving gorillas:

Had you heard of Dian Fossey before joining the staff as a gorilla tracker?

How did you become interested in working as a tracker?

“After secondary school I worked doing secular community work with Umuganda (a national holiday the last Saturday of every month in Rwanda to do community service) and I also volunteered with RDB (the Rwanda Development Board). The work I did for both was conservation-based and in areas around the park. I think conservation work is very important and I also really enjoy hiking and love animals, so when I heard about the job openings for trackers, I thought it would be a perfect opportunity for me to do more of all the things I love.”

What are some things you have learned while working as a tracker so far?

“I have learned so many things! I have learned how to communicate with gorillas and a lot about their behavior, including their diet, telling their ages and the differences in behavior based on age. I have also learned to tell all of the gorillas apart individually based on their nose prints.”

What are some of your favorite things about being a tracker?

“I love the physical condition this job requires. I am very strong now and can hike for miles. I also, of course, love being able to see the gorillas — it is a huge privilege. I also really enjoyed the training, particularly the paramilitary training, I learned a lot of very important skills that will be very useful to me throughout my life and work that I would otherwise never had an opportunity to learn.”

What are some of the challenges of being a tracker?

“The biggest challenge is the weather. The rain can make the job very difficult and can also make it difficult to find the gorillas if the rivers are flooded.”

What do your friends and family think about your work?

“My family is very happy that I got the job as a tracker. It is important to them and to me to not just work but to do something good for the country and the environment. They are also very grateful about the security this job has provided for us. I am now able to send some of my family members to university so they too can get good jobs and work to make a difference for the country.”

Who is your favorite gorilla in the Pablo group?

“I love to watch Cantsbee. He is very old now but he is still a great leader of the group. You can tell he is very wise and that the other gorillas, even the other males, look up to him in a way that is very special. He still plays with the younger gorillas and looks after all of the females in the group very attentively.”

What are your plans for the future?

“I hope to work as a tracker for a long time and one day be promoted to head tracker. I also hope to go back to university and learn more about biology and conservation, to maybe one day have work on the more data/scientific end of gorilla conservation."