Cell phones contain a number of hazardous substances that can impact the environment when discarded. But many of them also have been manufactured with a metallic ore called coltan, a major source of which exists in the Democratic Republic of Congo, home to the eastern lowland (Grauer) gorilla subspecies. This has resulted in the destruction, through mining, of some critical gorilla habitat, which of course also affects the entire ecosystem in which they live. 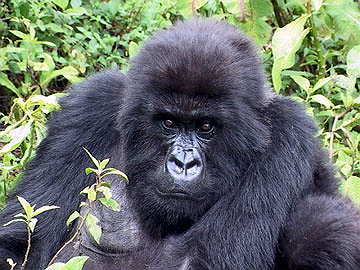 Recycling unused cell phones can help protect the gorillas, since reuse of the phones results in the need for fewer new ones, which reduces the need for coltan mining. Recycling also keeps other hazardous substances out of our environment. Now, you can also help the Dian Fossey Gorilla Fund International with our gorilla protection program, by donating your old cell phones to Zoo Atlanta.

Zoo Atlanta is home to the U.S. administrative headquarters of the Fossey Fund, and has partnered with a company called Eco-Cell to recycle cell phones. For each phone sent to Zoo Atlanta for recycling, a donation will be made to the Fossey Fund to assist with gorilla protection in Africa.

Cell phones can be mailed to: The Cell Phone Recycling Program; Zoo Atlanta; 800 Cherokee Ave; Atlanta, GA 30315. Any kind of cell phone will be accepted. For more information, go to: www.zooatlanta.org/conservation_recycle_cell.htm.