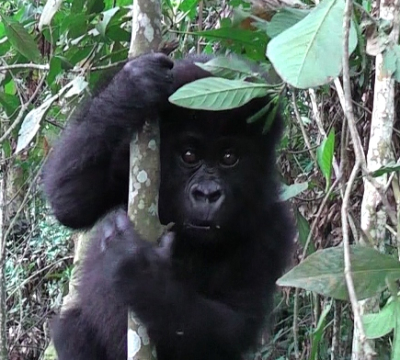 As he wakes up in the mosquito-net covered bed next to his caregiver on duty, orphaned infant gorilla Kyasa is taking in the new day with big, curious eyes. Under the same roof, less than six feet away, the other four Grauer’s gorillas at the GRACE gorilla rescue center in Congo are already active in the brand new, spacious night-house, knocking on bars, rolling in hammocks, and swinging on ropes.

It has been a month full of novelty for all the GRACE residents. On the one hand, gorillas Mapendo, Kighoma, Amani and Ndjingala, who arrived here last April, are just getting used to the new facility after sleeping in a room in an adjacent building for more than 10 months. At the same time, they have been trained to a new morning and evening feeding routine, where they receive their bananas and sosoma (a sorghum-soy-maize porridge) through the bars, only if and when they follow the behavior indicated by their caregivers – i.e. not stretching their hands out, but only opening their mouths on cue.

On the other hand there’s Kyasa, who arrived here at the end of January, after being confiscated from poachers at the end of 2010. After his one month quarantine, the infant — who is assumed to be about 8 months old — is being slowly introduced to the other gorillas, who have formed a cohesive group for almost a year now and are significantly larger in size. 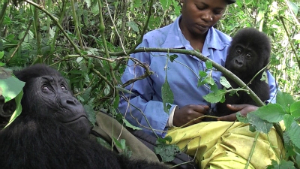 Although in the night-house they are still separated by bars, and Kyasa always sleeps with one of the seven caregivers, once day breaks and they move to the forest, the gorillas begin to interact. Naturally, the easiest bond for Kyasa has been with Ndjingala, who is just one year older and makes a good, delicate playmate. They climb trees together and roll on the ground. Even Amani, traditionally the most reserved of the gorillas here, joins in for a playing session now and then. Every day, Kyasa is gaining more confidence and moving further away from the caregivers, exploring the forest, trying out new forest foods, and essentially learning how to be a gorilla.

That is, until 6-year-old Mapendo, the dominant female and oldest gorilla in the group, begins to approach. At that point, Kyasa quickly seeks refuge in the protective arms of his caregivers.

“Mapendo is already a young adult, who, although gentle by nature, does not realize how strong she is, and that her play can be rough on the small infant. At the beginning we gave it a try, letting Mapendo have Kyasa, thinking that she might become a teacher and protector for him, but her maternal skills are not yet developed, as she herself lacked gorilla role models when growing up,” explains Sandy Jones, the Fossey Fund’s confiscated gorilla rehabilitation manager.

Consequently, a new strategy has been put in place: Mapendo can approach, touch and sniff Kyasa, even spend time around him, but is not allowed to snatch him away from the caregivers, as she sometimes would like to do.

“It is just as it would be in a wild gorilla group: females come to see a new infant, but they are not allowed to take it away from the mother,” says Jones. “We will give it time and allow the bonds to form at a natural pace which suits every gorilla individually and all as a group.” 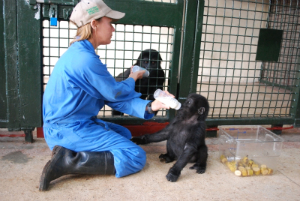 Just as everyone here is adapting to something – be it the new night-house, the new feeding techniques or the new group dynamic – another infant Grauer’s gorilla has been confiscated from poachers in Eastern DRC and will hopefully soon be on its way to GRACE. So will the six older gorillas currently housed in Rwanda in a temporary holding facility. GRACE Manager Luitzen Santman is prepared to take on the new challenges, as the center is growing considerably in size and scope.

“In a few weeks’ time we will have 12 gorillas here, who will eventually form one group. By and large this means they will get a real family, where they will no longer be ‘orphans.’ The next crucial step for us is building the ‘freedom fence’ around a large forested area, so that the gorillas can be more free, truly rehabilitated, and successfully prepared for a release into the wild.”