The Gorilla Rehabilitation and Conservation Education (GRACE) Center in eastern Democratic Republic of Congo reached a major milestone this week by officially opening a 24-acre forest enclosure for its 13 resident Grauer’s gorillas, all orphans that were rescued after being illegally captured by poachers and traders. GRACE is the only facility in the world that provides rehabilitative care for this highly endangered gorilla subspecies, and ultimately aims to reintroduce gorillas back into the wild.

GRACE was founded in 2009 by the Dian Fossey Gorilla Fund International in collaboration with the Congolese Wildlife Authority (ICCN) and the Tayna Center for Conservation Biology. It has operated as an independent nonprofit organization since August 2014. The forest enclosure project, which has been called the gorillas’ “Freedom Fence,” was made possible by a major fundraising campaign by the Fossey Fund, along with contributions from GRACE partners the Dallas and Houston Zoos, and by a grant from the Margot Marsh Biodiversity Foundation. 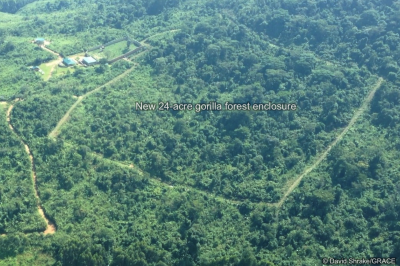 In 2012, GRACE began building a 10-hectare (24-acre) enclosure for the gorillas inside former gorilla habitat adjacent to the Tayna Nature Reserve in the Kasugho region of North Kivu Province. They were first introduced into their new habitat in March 2015. The forest enclosure consists of mature trees as well as dense undergrowth and therefore provides an ideal environment for the gorillas to practice survival-critical skills such as foraging, nest building, and coordinating group movements. The enclosure is the largest of its kind in the world.

GRACE’s remote, mountainous location made construction a major challenge. Without access roads available at the construction site, every piece of equipment and material used had to be carried up and down the mountain. The project enlisted the help of over 200 people from local communities, more than half of them women. Gorilla experts from the Dallas and Houston Zoos and Disney’s Animal Kingdom also consulted on the enclosure’s design and construction.

“The Fossey Fund is thrilled to see the Freedom Fence completed and the GRACE gorillas one step closer to living like they would in the wild,” said Dr. Tara Stoinski, CEO/Chief Scientific Officer of the Fossey Fund and a GRACE Board member. “Our staff cared for many of these gorillas for years and so it is especially meaningful for them to see them enjoying their new home. We are very grateful to all the Fossey Fund donors who helped make the fence a reality and congratulate the GRACE team and its partners on all the incredibly hard work that went into building the fence.” 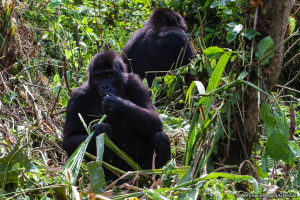 The GRACE gorillas are between 3 and 13 years old and live in a single group, which serves as their surrogate family. For some of them, the opening of the forest enclosure was their first forest experience since being captured from the wild. However, upon entering their new space, the gorillas acted immediately at ease and began feeding on vegetation and climbing trees. The group now spends more than 6 hours each day inside this new habitat, and they are adjusting wonderfully to forest life.

“When the gorillas took their first steps into their new forest habitat, it was an incredible moment for GRACE,” said GRACE Congo Director, Luitzen Santman. “The staff and community have worked so hard over the past three years to achieve this milestone for the gorillas. We watched proudly and with great excitement as the gorillas took to the forest like they had never left it.”

A research team at GRACE now observes the gorillas throughout the day from five towers situated around the enclosure’s perimeter. The goal is to track how the group uses the forest and how it is impacting the gorillas’ rehabilitation progress.

GRACE also works with local communities on conservation education to help protect the Grauer’s gorillas remaining in the wild, particularly in the Tayna region. The new forest enclosure will play an important role in these efforts as well. Local schoolchildren and adults will soon be able to visit GRACE to view gorillas from a platform outside the enclosure. This educational program will teach about Grauer’s gorillas and the threats they face while instilling pride in visitors for having this great ape as part of eastern DRC’s natural heritage. 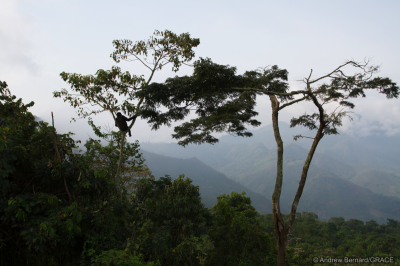 The forest enclosure marks the next chapter in the rehabilitation process for the GRACE gorillas. Whether reintroduction will be possible awaits further study, but in the meantime, this new habitat provides the ultimate playground for the young gorillas.

“The gorillas have been through so much,” said GRACE Executive Director, Dr. Sonya Kahlenberg. “They lost their families, survived capture, and were rescued from terrible conditions. Providing this enclosure so they can reconnect with their forest home is the very least we can do.” She added, “When you see them up in the trees foraging and playing together, it’s just incredible. Their resiliency never ceases to amaze me.”

For more information about GRACE, please visit http://gracegorillas.org/. To view a video slideshow of the forest enclosure, click here.