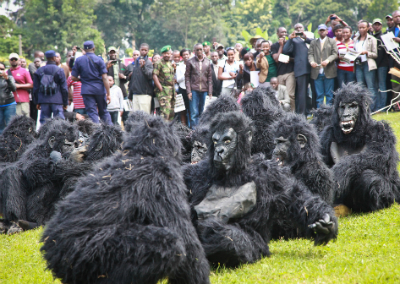 The eighth annual Kwita Izina gorilla-naming ceremony, hosted by the Rwanda Development Board (RDB) in Kinigi, brought together conservation partners, government officials, foreign dignitaries and members of the local community to celebrate on Saturday, June 16. One hundred and forty-one gorillas have been named in the last eight Kwita Izinas. As Rica Rwigamba, RDB head of Tourism and Conservation put it, “the gorillas have been quite busy.”

Nineteen mountain gorillas born within the last year were given names at this year’s ceremony. Four of these infants live in Karisoke research groups, and the other 15 are from groups habituated for tourism by the RDB. 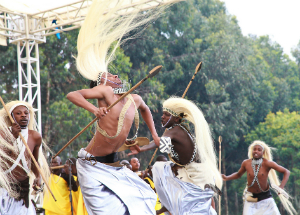 The process of naming the newborn gorillas began almost three decades ago as an informal ceremony by field staff who worked in Volcanoes National Park. In 2005, the RDB hosted the first Kwita Izina as a formal gala, with the theme “Ensure the Future of the Mountain Gorillas of Rwanda.” A tradition in Rwanda for centuries, “Kwita Izina” is a naming ceremony for newborn human babies. The RDB saw an opportunity to raise awareness about mountain gorilla conservation on a national and international level, and adapted the ceremony for newborn mountain gorillas in Volcanoes National Park.

The Kwita Izina celebration has expanded over the years to include a week of additional activities around the country. An international cycling competition, with teams from seven different African countries participating, took place on June 9 and 10. Starting in the capital city of Kigali, the race took the cyclists on a circuit through the region surrounding Volcanoes National Park. Members of the increasingly successful Team Rwanda took first and third place and also won the title of “number one team” this year.

On June 13, a conservation conference was held in Kigali, focusing on the year’s theme, “Sustainable Tourism for a Greener Economy.” This was followed by Community Day and Igitaramo (a local celebration for members of the community) on June 15 in Kinigi. 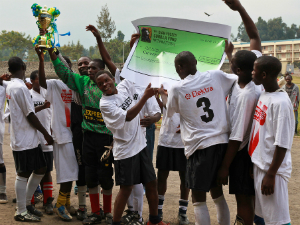 The Dian Fossey Gorilla Fund’s Karisoke Research Center participated in the Kwita Izina week’s festivities by hosting a soccer competition among local schools. Four school teams, representing the four districts around Volcanoes National Park (Musanze, Nyabihu, Burera and Rubavu) began the competition the preceding week. On June 15 the finalists, teams from the Rubavu and Musanze districts, competed for the championship as a part of the Kwita Izina festivities. The champions – the Bisate School team from Musanze – were awarded 200,000 Rwandan francs from the Dian Fossey Gorilla Fund and the gold Kwita Izina trophy. But the runner-up team didn’t leave empty handed. They received a check for 100,000 Rwandan francs from the Dian Fossey Gorilla Fund.

The following morning, our staff packed into field cars for the drive up to Kinigi. Upon arrival, we joined hundreds of guests who were convening on the large grassy expanse at the base of Mount Sabyinyo where this year’s Kwita Izina would take place. Traditional drummers were lined up with drums of various shapes and sizes, ready to open the ceremony with a hair-raising performance. Rwandan dancers appeared on stage, one by one, and performed beautiful dances, kept in time by the periodic stomping of their bell-wrapped feet. Local children dressed in gorilla costumes, symbolizing the infants to be named this year, were herded through the lawn up to the stage by RDB and our Karisoke staff trackers. Shortly afterwards they were followed by 19 special guests chosen to name a gorilla.

Every year, each mountain gorilla infant is given a name that has a special meaning in the local Kinyarwanda language. The four infants born within the last 12 months to the Karisoke research groups received names, beginning with the youngest addition to Titus’ group.

Imvune’s infant, of Titus’ group, was born on March 15, 2012. The infant was given the name “Ndizeye,” which means “hope” in Kinyarwanda. Ndizeye is the first infant born in the group after the legendary silverback Titus died in 2009. Naming the infant Ndizeye signifies the hope that Rwanda has for the health of Titus’ group and their continued growth. Nidezeye was named by Musanze District Mayor Winifrida Mpembyemungu. 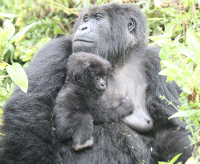 The new infant in Pablo’s group, born on July 7, 2011, to mother Mahane, was named “Itorero” in honor of a Rwandan culture group established around the time of his birth. Itorero was given his name by Celse Gabinema, a Rwandan artist who works to promote tourism through music.

The third Karisoke research group infant to be named was from Kuryama’s group, born to mother Mahirwe on Oct. 29, 2011. The infant received the Kinyarwanda name “Impamo,” meaning “the truth.” Kandhana Karanana Kumar, a Primary 3 student and winner of the Kwita Izina 2012 drawing competition, gave Impamo his name. 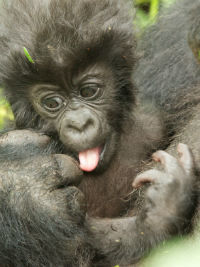 Finally, Bishushwe’s infant, of Urugamba’s group, who was born on Nov. 13, 2011, was named “Amatwara” by Fabrice Gatera, who represented Eco-Protection, one of the leading companies involved in waste treatment in Rwanda. Amatwara means “strategies” in Kinyarwanda. According to the RDB, “this is to recognize all strategies involved in mountain gorilla conservation.”

The formal ceremony was closed by the guest of honor, Prime Minister Pierre Habumuremyi. The prime minister commended everyone who had “worked so tirelessly for the conservation of mountain gorillas” in the last year, and expressed his joy at the continued growth of the population and his desire to see conservation efforts continue to expand to all of Rwanda’s unique biodiversity. “It is important to the Rwandan government that we preserve the delicate ecosystem in our country while also providing for our people,” said Habumuremyi.

The 2012 Kwita Izina ceremony was yet another successful and joyous celebration, honoring the growth of the critically endangered mountain gorilla population that so many organizations work so hard to conserve. The Dian Fossey Gorilla Fund was honored to contribute to this year’s festivities and we look forward to many more years to come.