Rwandan Children: “This is Your Forest”

Every morning, tourists who plan to visit Volcanoes National Park make their first stop at the Rwanda Development Board (park management) office in the village of Kinigi, close to the park’s border. Traditional drummers and dancers perform on a lawn, while tourists wait to be assigned to guides who will take them up into the forest. One morning in October, Joseph Karama, the Dian Fossey Gorilla Fund’s Conservation Education Program manager, arrives with a group of 20 fifth grade children from Nyabitisinde Primary School. He passes around green rain jackets and rain boots for a hike to Lake Ngezi as part of the Fund’s primary school outreach program. 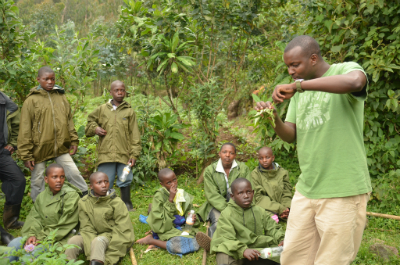 Karama explains to the students that they are important guests at the park today because what they are going to see actually belongs to them as Rwandans. Many of the tourists smile at the children, and some even come to say hello.

Since 2009, the Conservation Education Program has visited primary schools in communities around Volcanoes National Park to teach children about the park's biodiversity and the threats it faces, and what children can do to help protect their environment. “The Fossey Fund realizes that we need a conservation-sensitive population around the park,” Karama says. “We need to educate the communities around the park so that they can join the effort to conserve the gorillas' habitat. Targeting children is the best way, because at their age they are ready to listen and to learn. Research has shown that if you want to effect behavior change, it is best to start with younger people.”

The classroom component of the primary school outreach program reached approximately 1,868 children in Primary-3 and Primary-5 classes at six schools this year. Each year since 2010, each participating school has been asked to select their 20 best-performing students to go on a special guided nature walk in the park. Last year, the Fossey Fund took 80 children on these walks, with the generous support of Partners In Conservation at the Columbus Zoo. This year, we were able to increase the number of participating students to 120. 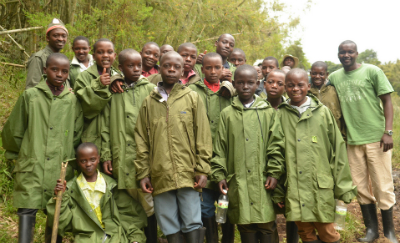 The group that is going on the hike to Lake Ngezi today consists of the top 20 students from Nyabitisinde Primary School and is just one of the six groups that will visit the park this week. None of these children have been on a guided walk in the park before, despite living in communities adjacent to it.

To reach the park boundary, the group — including Karama, an RDB guide, and a teacher from the school — walks through the agricultural fields of pyrethrum and potatoes that abut the park. Along the way, the RDB guide and Karama take turns talking to the children and engaging them by asking them questions about what they have already learned in class. For example, Karama reminds them that one of the most significant actions children can take to protect their environment is to plant trees like bamboo and eucalyptus that are often harvested for household uses. By planting these trees in their communities, they can reduce people's need to enter the park to obtain these resources.

When the group reaches the stone buffalo wall that marks the park boundary, Karama and the guide remind them that children can play a role in preventing illegal activities inside the park. If they see people entering the park without permission, or find someone selling illegally harvested goods from the forest, they should report it to elders who can take appropriate action.

Once inside the park, the children name different animals that can be found in the forest. Gorillas are among the first animals mentioned, but the students are also careful not to forget the dung beetle, which plays an important role in its ecosystem, despite its small size. As the group hikes further into the forest, Karama and the guide point out different gorilla food plant species along the way.

The park visits clearly have an effect on the children. Karama says, “It's different. When we go to the schools, yes, we do take them outside of the classroom and we play games, but when we take them inside Volcanoes National Park, their attitude, their reception, everything changes. On the way out of the forest I am normally with their teacher, and he's like, ‘This is amazing! This is great! This is going to help them pass the national exam.’” Some subjects on the national exam cover topics that are addressed during the park visit, and the hands-on experience of the nature walk seems to help children better understand and absorb the lessons they learned in class. Karama says, “You know, the kids, they learn these things in the normal subjects at school, but they forget them. Now that they have gone to the park and they have seen it with their eyes, they won't forget it.” 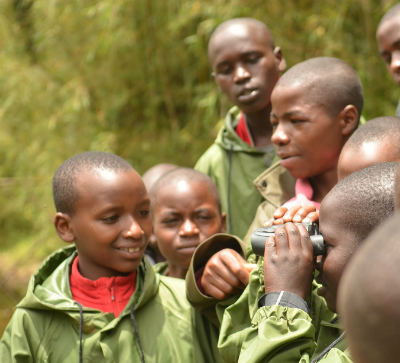 Finally, the group reaches Lake Ngezi, a crater lake on the lower slopes of Mount Bisoke. The lake is surrounded by bamboo trees, with grasses growing in its shallows. From the edge, the group is able to observe several ducks swimming nearby. But perhaps the most exciting and surprising sighting is a group of gorillas ranging on a slope just across the lake. It is very unusual to see gorillas spontaneously in the park, if one is not on a gorilla trek. The students sit down on the bank of the river to relax for a few minutes and observe the gorillas, passing around a pair of binoculars for a closer look. After a little while, they head back down the trail the way they came.