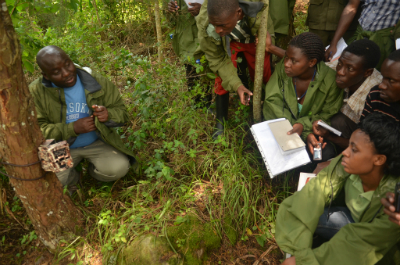 The field research course is the second part of a series of educational opportunities that the Fossey Fund provides for NUR biology students. In their second year they are invited for an “Introduction to Mountain Gorilla Conservation” course, at a time when biology students have to decide whether they will concentrate in conservation, specializing in botany or zoology, or in biotechnology. The Fossey Fund offers the course as an opportunity for students to see conservation biologists in action and to encourage them to enter the field.

The students who attend the third-year field methods course have by this time chosen to concentrate in conservation biology and have also selected either botany or zoology. The course offered at Karisoke is tailored to teach them the specific techniques they will need to use to collect data in their chosen field. The students spend most of their five days in the field in Volcanoes National Park or at Buhanga Eco-Park with two NUR lecturers and Fossey Fund staff. 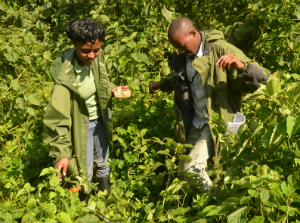 This year, zoology students practiced small mammal trapping and identification techniques and bird identification (using the same techniques Fossey Fund staff employ for common bird monitoring); learned about surveying large mammals using transects and plots; and visited golden monkeys in Volcanoes National Park to learn about their behavior and ecology. Students also learned how the Fossey Fund uses camera traps to survey carnivores and other large mammals. Botany students learned how to develop plots and inventory plants in a designated area. To understand how to perform biodiversity inventories, they practiced counting the abundance and diversity of plant species at Rugezi Swamp, not far from Volcanoes National Park.

Tuyisingize explains, “The course covers three main areas in the domain of scientific research. Students learn how to design a research project proposal, including developing research questions, hypotheses, and predictions; methods of field research and data collection, including data management; and how to write their results and discuss them.” 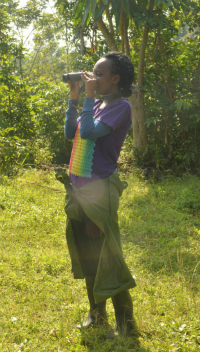 Joseph Karama, the Fossey Fund’s Conservation Education Program manager at Karisoke, says, “The third-year field course helps build a practical perspective on the theory that students learn in class. Since so much of scientific research and conservation takes place in the field, the course is a chance for students to go out and learn practically how to do the activities, like drawing plots and transects and taking notes on animal behavior, that they will need when they go on to do their undergraduate thesis projects next year.”

Next year, six of the best-performing third-year students who participated in the field courses will be chosen by NUR to do their undergraduate thesis projects with the supervision of Fossey Fund scientists. These students will also receive financial and logistical support from the Fossey Fund. Tuyisingize says that even though the Fossey Fund can provide support to only six students for their undergraduate projects, he is in contact with many more students who participated in the third-year course and request help from Fossey Fund scientists in field research techniques and data analysis because they learned so much about these topics during the field methods course. “They see the Fossey Fund as a key institution specializing in conservation,” Tuyisingize says.

In March, second-year students arrived at Karisoke to participate in the Introduction to Mountain Gorilla Conservation course, beginning the Fossey Fund’s relationship with a new class of NUR biology students.