Since 2002, the Dian Fossey Gorilla Fund International has been involved in a partnership with the biology department at the National University of Rwanda (NUR), to encourage Rwandan students and scientists to explore the field of conservation. This includes a series of field-based conservation education activities at our Karisoke Research Center, and enabling students to conduct conservation research projects in Volcanoes National Park, home of the endangered mountain gorillas. Last year we had more than 40 students attend our field-training courses and quite a few have gone on to complete their undergraduate research at Karisoke.

In 2006, NUR students at Karisoke took on many aspects of mountain gorilla ecology, including activities of lone silverbacks, and the plants that mountain gorillas eat. In addition, the students studied other aspects of the forest ecosystem, such as other species that live in the Virungas with the gorillas and crop raiding by wild animals in border areas between protected lands and local communities. 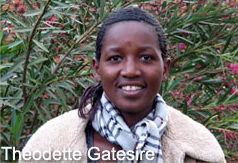 Student Theodette Gatsire chronicled the activities of lone silverbacks, which, unlike most gorillas, live a solitary life for some period of time or even permanently. For three months, she closely observed the activities and ranges of two silverbacks that we monitor from Karisoke – 17-year-old Gwiza and 16-year-old Inshuti.

Alphonse Nahayo wanted to see if gorillas eat plants that are known for their medicinal properties, and next wants to find out if the gorillas seem to use these for “automedication”! 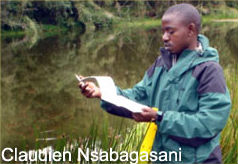 Deogratius Tuyisingize and Claudien Nsabagasani each studied other animals that live in the forests with the gorillas – the golden monkey and an endangered bird called the Grauer’s scrub warbler. These are important species that have received much less study than the gorillas, and it is hoped that new information about their behaviors and status will encourage further attention.

This program is just one of many education programs we are involved with at the Karisoke Research Center and through our other programs, which range from primary school initiatives to community education.