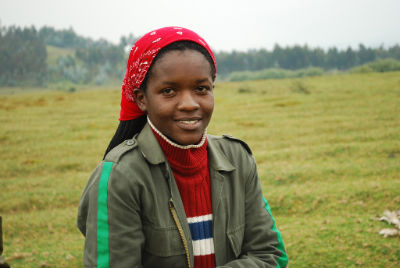 On the weekly field schedule posted in advance every Saturday at the Karisoke™ Research Center, among dozens of names of men – research assistants and trackers – Theodette and Bernadette stand out. The only two Rwandese women scientists who hike the Volcanoes National Park several days each week, Theodette Gatesire and Bernadette Arakwiye also made history earlier this year, by being the only African women to take a leading role in the intense field operation of the mountain gorilla census in the Virungas.

Thirty-two-year-old Theodette and 25-year-old Bernadette first came to Karisoke as students from the National University of Rwanda. At Karisoke™ they completed field studies and worked towards their undergraduate dissertations. Upon completing their degrees, in biology and zoology respectively, the two young women joined the Karisoke staff in the late 2000s and soon thereafter became accomplished research assistants. 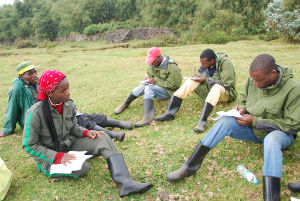 For Theodette, working with the mountain gorillas had been a long-standing dream. “I wanted to be in my field and in the field, around these amazing animals” she says. “This job is a real privilege, even if it can be quite tough at times.” The toughest so far: the several-hour steep hike to reach Pablo’s group, which ranged in the grueling, cold heights of the Kimbagira region for months this year. Now that all gorilla groups have come down close to the park edge to feed on bamboo shoots, Theodette speaks of another challenge: knowing how to approach the focal animals she is collecting data on in the very thick, tangled vegetation, so that she gets good information and the gorillas aren’t disturbed.

Bernadette, on the other hand, chose to be part of Karisoke’s biodiversity team. “I preferred this work as it involves real diversity and allows me to learn so many different things. Another plus is that I don’t only collect data, but I also have the chance to analyze and present it.” In fact, just over a month ago Bernadette participated in the prestigious International Primatological Society Congress in Japan, where she presented her poster on the positional behavior of the golden monkeys in Volcanoes National Park. 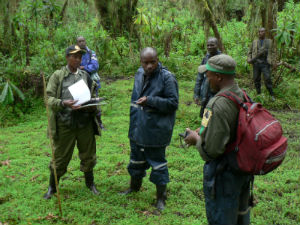 For both Theodette and Bernadette, the highlight of their field work this year was the mountain gorilla census. The vast operation spanned two months (March and April) and three countries (Rwanda, the Democratic Republic of Congo and Uganda), and required incredible dedication and skills on the part of the field staff. Among the 60 participants, 13 of whom were Karisoke employees, Theodette was the only Rwandese woman team leader, and Bernadette the only Rwandese woman team leader-assistant. Working in two shifts of two weeks each, they had the exciting but equally demanding experience of camping in the forest for nights on end and putting in difficult 12-hour tracking days, oftentimes through very muddy, steep slopes and ravines. 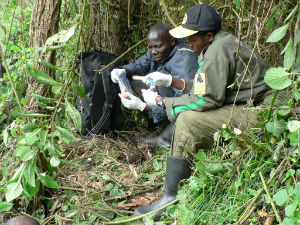 “When I was asked to participate in the census, I was more than happy to agree, as this opportunity may never arise again,” Theodette says. “Leading a team and seeing our operation succeed was very gratifying, especially at the end of some exhausting days in the field.” As team leader, Theodette had to train her team to manipulate the field equipment; supervise all operations; fill in data sheets; and process all the gorilla fecal samples collected from the night nests for DNA analysis, first in alcohol and then in silica gel tubes.

Bernadette also valued this unique experience, despite its hardships. In particular, she recalls a late-night, when her team had lost its way in the dark: “Somehow our compasses failed us. We thought we were heading to Rwanda, but we were instead on our way to Congo, in the middle of a very nasty nettle bush, with our flashlights dying out as well. I then thought of using the GPS to help us track our way back, and that’s how we eventually made it to our camp.”

For each of the two women separately, another significant challenge was to live and work in the forest for such a long time surrounded only by men. “Based on my experience with the Karisoke trackers, who have always treated me very nicely, I was confident that my census co-workers would also be respectful and helpful. And indeed they were,” says Theodette. “It was a bit weird at the very beginning, but then I felt their support and respect,” adds Bernadette. “They understood I was not as strong as them, so in the field they allowed me to go first, so that I would set the pace and benefit from the best path condition.”

As the year now draws to the end, Theodette and Bernadette are back in their regular jobs at Karisoke, which involve a combination of field and office work. Just around the corner for them, however, a new exciting prospect is looming: master’s degree programs, to begin in 2011.