Infant Akarusho joined silverback Inshuti this morning. The infant is fine but obviously distressed, after a night spent alone. He cried when he saw Inshuti and from that time he was very close to him for the whole day. Inshuti is still dealing with his wounds (from attacks by lone silverbacks) but he moves and feeds abundantly. There is a large wound on his head. 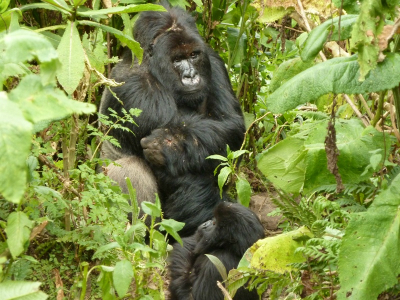 "Lone" silverback Giraneza is still with females Taraja and Nyandwi. We reached them late this morning after a long time tracking. Following their traces from yesterday, we found two interaction sites and lone silverback Turatsinze by himself, 300 meters down Bikereri hill, while Giraneza and the females were up top.

Giraneza is clearly interested in Taraja, as he was making frequent sexual vocalizations and looking at her everytime she moved. Giraneza displayed twice to her. Nyandwi was following the two. In general the small group seemed to be doing fine and started moving downhill. (Inshuti is also on the bottom of Bikereri, about 1 kilometer away.)

Female Shangaza and her infant Ngwino were still not found today. Tomorrow the anti-poaching team will try again to find them. We really hope they will be with Inshuti, which is the safest place for them at the moment.