The Continuing Saga Of Ugenda And Urugamba – A Group Split!

Shinda, the dominant silverback in one of the three famous gorilla groups monitored by Karisoke for many years, died on Nov. 24, 2008 and our staff at the Karisoke Research Center has been following the remainder of his group closely since then. When a dominant silverback dies, the group usually splits or the second-ranking silverback takes over. The Shinda group split between two silverbacks in the group, Ugenda and Ntambara, starting an eventful story that continues to this day. 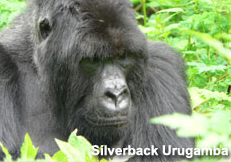 Ugenda's group had 18 individuals, including another silverback, Urugamba. The group was solid until June 2009, when Urugamba went along his own path followed by five others: two adult females, Bishushwe and Pasika; Bishushwe's infant son Igisubizo; Pasika's son Inkumbuza, a juvenile; and Imvune, a female who had not yet given birth The subgroup continued to return to and separate from the main group for a while. This is a perfect example of "fission-fusion" behavior within a mountain gorilla family group. A definitive split between the groups had not yet occurred by the end of 2009.

Karisoke trackers and research staff are following both groups. They monitor each individual to see who is still with the group and who has left. Imvune continues to go back and forth between Ugenda's group and Urugamba's group. Researchers follow Imvune and take careful note of her behavior, as this helps us to learn about mountain gorilla group dynamics and female transfers. Both groups as a whole are followed to see how far apart they are and where their nest sites are located. The beginning of 2010 has found Ugenda and Urugamba now leading separate groups. 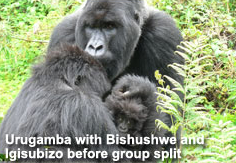 Throughout February, both males have been leading their groups apart from each other. Only Imvune continues to go between groups, though she has been staying with Ugenda most often. During the last few weeks of February, the two groups have been approximately 1-1.5 km apart, as are their night nests.

Karisoke researchers, trackers and staff will continue to monitor these two groups alongside seven other important mountain gorilla groups that are the focus of our long-term studies.