Winnie Eckardt, Ph.D., has taken on a new role as research manager at the Fossey Fund’s Karisoke Research Center in Rwanda. She is no stranger to Karisoke, having worked there first as a research assistant starting in 2004, and later returning as a teaching fellow with the National University of Rwanda to train and supervise graduate students conducting research at Karisoke. She also did her doctoral research on maternal investment in mountain gorillas, while based at the University of Chester. 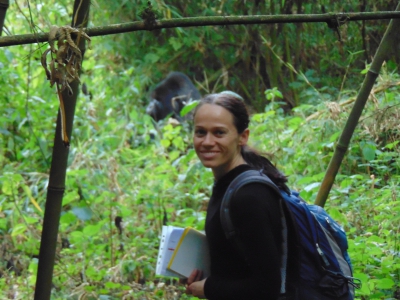 During 2011-12 Eckardt was again back at Karisoke to study the physiology of stress among mountain gorillas in relation to their health, collecting behavioral data and fecal samples, which provide information about gorillas' stress hormone levels and parasite loads. From 2013-2014, she analyzed those data at the Fossey Fund’s headquarters at Zoo Atlanta, in collaboration with Emory University and the Davee Center for Epidemiology at Lincoln Park Zoo.

Now, Eckardt has returned to Karisoke to work as research manager, and is enjoying being “reunited” with some of the gorilla groups she has known for years, especially Pablo’s group, led by silverback Cantsbee.

“I am very happy to continue contributing to gorilla conservation and help building a new generation of conservationists in Rwanda and the region. It was exciting to get back in the field and to see all the juveniles playing in Pablo’s group! Cantsbee, our oldest monitored gorilla and protector of the group, still looks strong and has hardly changed at all since I last saw him,” says Eckardt.