We are very happy to welcome Winnie Eckardt, Ph.D., back to Karisoke this spring as our Judith Harris and Robert Singer, M.D., postdoctoral fellow. Winnie is an old friend to Karisoke and the Fossey Fund. She started as a research assistant in 2004 and then went on to conduct her Ph.D. research at Karisoke from 2006 to 2008. Her dissertation focused on maternal investment among mountain gorillas – for example, how much energy they spend raising male vs. female offspring, which can be influenced by the rank of the mother in the group and other factors. She received her Ph.D. from the University of Chester in 2010. 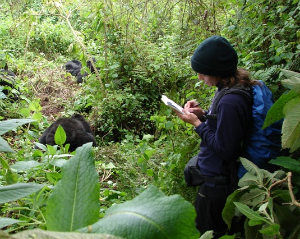 Winnie's postdoctoral project examines how potential stressors, both natural and those caused by humans, affect the behavior and health of the mountain gorillas. Although the link between stress and health seems obvious to humans – we can all think of a time when we were particularly stressed and became sick – we know very little about the role stress plays in the health of the gorillas. For example, are there individual gorillas that show evidence of chronic stress, and if so, do we find that these individuals have more health-related challenges, such as increased parasite loads?

The study will involve intensive behavioral monitoring accompanied by fecal sample collection to assess hormone levels and parasite loads. Among other results, Winnie and her supervisors at Karisoke, Katie Fawcett, Ph.D., and I, are hoping to provide guidelines for gorilla management that will help ensure the gorillas' long-term survival. For example, if the study were to find that tourists caused increases in stress for particular gorillas – such as mothers with new infants – one recommendation could be to limit tourist visits to groups with a recent birth.

Winnie's project will involve collaborations with both Lincoln Park Zoo, which will perform the hormonal analyses, and Emory University, which will perform the parasitology analyses. Winnie recently spent three weeks in the United States, visiting these laboratories to learn the methodology for collecting and analyzing fecal samples; working with me on finalizing the data collection protocols; and writing grants to support costs associated with the project. She also gave several talks on her history at Karisoke and managed to find a little time for sightseeing around Atlanta. It was a busy three weeks, but ones she seemed to relish.

"I'm excited to be learning two new fields, physiology and parasitology, to complement my experience in primate behavior and ecology, and to work with the teams at Emory University and the Lincoln Park Zoo," she says. "I'm especially looking forward to seeing the gorillas again – the silverback Cantsbee stands out – and working with the Karisoke field staff."

Winnie returned to Rwanda last year for six months as a teaching fellow at the National University of Rwanda (NUR), a position funded by the African Studies Association of the U.K. to strengthen the long-term relationship and knowledge transfer among NUR, the University of Chester and Karisoke. Winnie is a native of Leipzig, Germany, where she received her diploma (equivalent to the M.A. degree) in biology after conducting field research on monkey behavior in the Ivory Coast's Tai National Forest.

"Ultimately, I'd like to teach more, but combined with research," she says. "I believe we can achieve sustainable conservation only through education. I am greatly indebted to the donors who provided me this opportunity to return to Karisoke, continue expanding my understanding of gorillas and have a meaningful impact on their conservation." 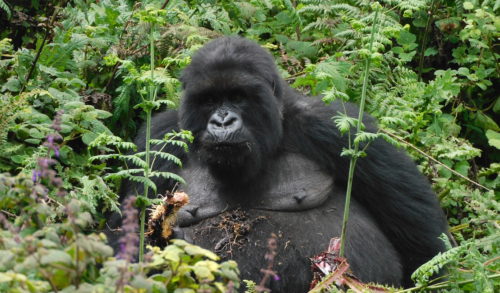