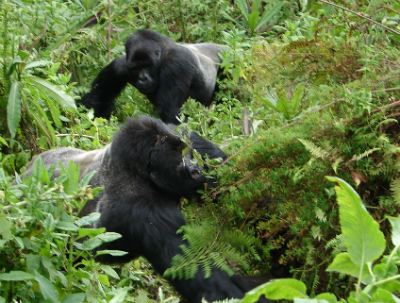 Silverbacks Inshuti and Giraneza are interesting individuals among the gorillas the Dian Fossey Gorilla Fund monitors in Rwanda’s Volcanoes National Park. Both were lone silverbacks who acquired females of their own from other, established groups, something the Fossey Fund does not see often among the groups that we monitor. Inshuti acquired his first females from Pablo’s group in 2007, and earlier this year, Giraneza followed in Inshuti’s footsteps by acquiring females Taraja and Nyandwi from Inshuti’s group. The two groups have since been intertwined. They often range close to one another and have engaged in several interactions.

Unfortunately, Inshuti and his last remaining female, Shangaza, crossed into the Congolese side of the Virungas at the end of July, and the Fossey Fund was forced to suspend monitoring of the group due to insecurity there. It was quite disappointing, because Inshuti had experienced several tragic blows to his group in the month preceding his migration to the Democratic Republic of Congo (DRC), including the death of Shangaza’s juvenile, Ngwino, and the dispersal of the infant Akarusho. We had hoped to continue monitoring these gorillas and ensuring their safety.

Although we were no longer monitoring Inshuti’s group, Giraneza’s group gave us much to think and write about. A small and newly established group, they have had their ups and downs. We have seen the females unaccompanied by Giraneza on a couple of occasions, and we wondered if they would stay with him or try to transfer to another group. Thus far, Giraneza has held them together. 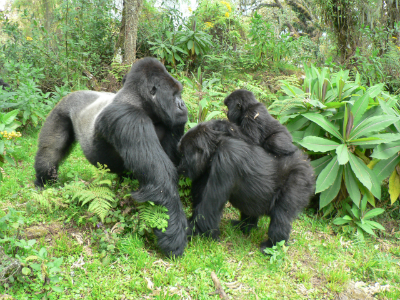 However, on Sept. 14, Giraneza’s group experienced a long interaction with Kuryama’s group. When field staff arrived, the interaction was already in progress, and from there it continued for 2 1/2 hours! Throughout the interaction, Giraneza’s two females, Nyandwi and Taraja, seemed interested in joining Kuryama’s group. Although Giraneza managed to retain them, he seemed distressed following the interaction. The next day, trackers recorded Giraneza displaying nine times, and it was not clear what was prompting the displays. On Sept. 16, trackers observed a silverback and a female running up a hill but chose not to pursue them, to avoid causing any further stress. Because they could not clearly see the two gorillas, trackers were unable to confirm whether this was Giraneza and one of his females. Unfortunately, Giraneza’s group has not been seen again since.

Although Giraneza’s trackers have searched for Giraneza ever since the group went missing, even with assistance from the Rwanda Development Board (park management) and our anti-poaching team, we have not been able to locate the group again. During one search, the team discovered a trail heading in the direction of the DRC, but could not say for sure whether the trail belonged to Giraneza’s group. It is possible that Giraneza may have left his normal home range after the interaction with Kuryama’s group. Although groups usually stay within their home ranges even after stressful events, Inshuti has led his group out of their usual home range after a series of stressful interactions. We do not have enough information about Giraneza’s movements to be sure, but it is possible Giraneza did the same.

In a surprising turn of events, while searching for Giraneza’s group the trackers found Inshuti’s group in its former home range. The group was still composed of just two individuals, Inshuti and Shangaza, but they appeared to be in good health and behaving normally. We were concerned about the high presence of snares in the area where they were last seen, so we were very relieved to find both gorillas in good condition.

Unfortunately, our reunion with the group was brief. We were able to observe them only three times following their return on Sept. 27. They moved a lot, and often their trails mixed with the trails of buffalo, making it difficult to track them. Indeed, tracking a group of just two gorillas is a challenge in and of itself! Moreover, they began ranging in the same area as before they entered the DRC, far from the park boundary, and it took great effort for our trackers to return there each day to look for the group. 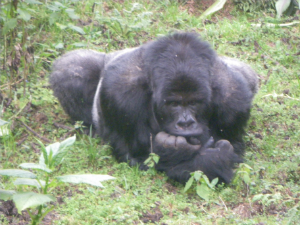 To date, neither Inshuti’s group nor Giraneza’s group have been found. We hope to encounter these groups again to ensure that they are healthy and safe. Additionally, they have much to teach us about gorilla group dynamics. We would like to learn more about small, two-gorilla groups, like Inshuti and Shangaza. There are currently no other examples of this among the groups the Fossey Fund monitors. A group like Giraneza’s, which was so recently formed by a lone silverback, also offers an opportunity to observe how a newly formed group develops and how successful they are.

We will continue to do periodic searches for both groups and hope to see them again soon.