Relentless rains began affecting Rwanda's Volcanoes mountain area on Thursday, May 13. Our trackers at the Karisoke Research Center were unable to reach the gorilla groups for the next two days, because the conditions in the forest were too treacherous. By Sunday, our trackers found a route to the gorillas and discovered three mountain gorillas dead in the forest. A further infant from another group was found dead on Monday. The weather also claimed at least 11 people in the area and hundreds of houses were washed away including the home of one of our trackers. 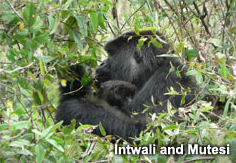 Three of the dead gorillas were from Pablo's group, which is the largest of the gorilla families that Karisoke Research Center studies and also the group that ranges in the highest altitude and coldest areas in Volcanoes National Park. By 11 a.m. on Sunday, trackers had been slogging through the thigh-high mud for about four hours when they encountered a macabre scene: an ill-crafted gorilla night nest with an adult female, face down inside; on top of her body an infant was still alive, but has since died. The trackers searched for the rest of the group and found another dead infant along the way. The men stayed in the forest until after dark slogging through nearly impassable forest conditions to confirm the safety of the other gorillas.

Through the tireless efforts of the Karisoke trackers, who dedicate their lives to these animals, Pablo's group was finally located, more than three hours after leaving the nest site and we were relieved to find that all of the other gorillas looked well. However, female gorilla Mahane, Mahane's infant, female Intwali, and Intwali's infant (Mutesi) were not with the group.

Director of Karisoke Research Center Dr. Katie Fawcett, and representatives from the Rwanda Development Board (RDB) and the Mountain Gorilla Veterinary Project then met to decide on the best course of action. 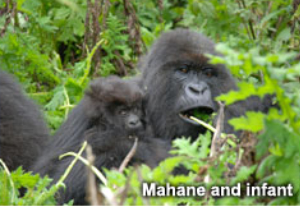 Three teams were sent up to Pablo's group on Monday: two to track the gorillas and monitor them for signs of infection or illness and one to retrieve the three bodies. The trackers found Mahane alive and well, but her infant was not with her. It was later confirmed that Intwali (24), Mutesi (about 1-1/2 years old) and Mahane's infant (under a year old and not yet named) were all dead. The rest of the gorillas in the group all appear healthy.

To compound the tragedy, on Sunday trackers also noted that in Ugenda's group Imvune's infant was unwell and was found dead on Monday. Infant mortality is very high among gorillas and the extreme weather likely exacerbated that reality. All of these deaths highlight the fragility of this critically endangered species. "It is horrible to have so many infant deaths at once," says Dr. Fawcett.

Necropsies have been performed on all but Imvune's infant, who had not been retrieved from its mother as of this writing. "Everything points to weather exposure," Fawcett says. "All of the gorillas had food in their stomachs and their lungs were clear." The three bodies have already been buried according to protocol.

The weather was clearer by May 18, giving the gorillas a small reprieve from the wet and cold conditions. Amid the tragic news that came out of Volcanoes National Park this weekend a birth was also recorded on Sunday. Kubaka in Ntambara's group has a new infant that appears to be doing well.