Cantsbee, the dominant silverback of Pablo’s group, turned 34 years old yesterday. Ordinarily we do not write about gorilla birthdays, but Cantsbee is a special case. Not only is he one of the last living gorillas named by Dian Fossey, but he also presides over the largest group of mountain gorillas that the Dian Fossey Gorilla Fund monitors. At 34, he is still very strong, out-competing his son Gicurasi, the second-ranking silverback in Pablo’s group, for dominance. Although Gicusrasi occasionally challenges Cantsbee, there is no doubt that Cantsbee remains dominant in the group. 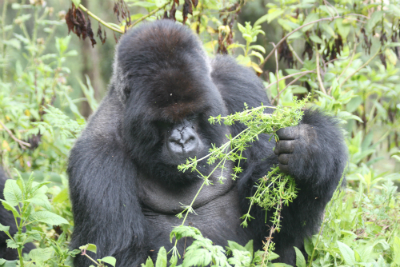 There are very few mountain gorillas for whom we have documented dates of birth and death, but of the few individuals for which we do have this information, the oldest male gorillas the Fossey Fund has monitored died at the age of 35. These two silverbacks were Pablo and Titus. Given how powerful Cantsbee still is we hope he will push this record and live for several more years.

For more about Cantsbee, click to the news story.

Thank you for your continued support in helping us protect the gorillas and provide special information like this! For ways to help, click here Take Action-Donate