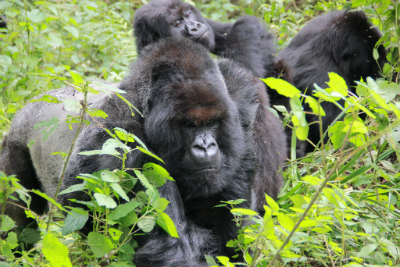 The legendary and historic mountain gorilla silverback Cantsbee reached his 35th birthday on Nov. 14, 2013, and is now the oldest male gorilla monitored by the Dian Fossey Gorilla Fund International. Cantsbee has been observed ever since his birth, which was noted by founder Dr. Dian Fossey in 1978, and he is now also one of the few remaining gorillas that Fossey observed herself. Cantsbee now rivals the late great silverback Titus, who died at age 35, as the oldest reigning dominant silverback monitored by the Fossey Fund.

Cantsbee still presides over a large group of gorillas, which is named after another historic silverback, Pablo. At one point under Cantsbee’s leadership, this group reached the record size of 65 members. Currently it has 36 members, with the latest newborn arriving on Oct. 15 to mother Ishema.

Cantsbee was born in 1978 and was given his unusual name by Fossey, who thought that Cantsbee’s mother was a male until she gave birth! Fossey then exclaimed “It can’t be,” and that turned into the name Cantsbee. He became the dominant silverback in Pablo’s group in 1994, although he allowed the aging Pablo to remain in the group as second in command until Pablo disappeared in 2008. He has held the position of dominant silverback longer than any other male in the Karisoke research groups. Cantsbee was featured in the first episode of a 2010 BBC “Wildlife” documentary on gorilla life, “Kingdom in the Clouds,” showing him leading his group to the bamboo zone to feed on the new shoots. 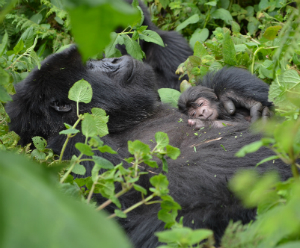 In recent years Cantsbee has faced dominance challenges from various other silverbacks, including his son Gicurasi and “outsider” Musilikale (who now leads his own group). In addition, there have recently been significant interactions between Pablo’s group and other groups, including a large group visited by tourists called the Susa group. This interaction resulted in some female transfers but luckily Cantsbee made it through without serious injuries, since son Gicurasi seemed to be more involved in this struggle. However, ongoing changes in the group’s dynamics can be expected, as the members deal with the aging of their long-time leader.