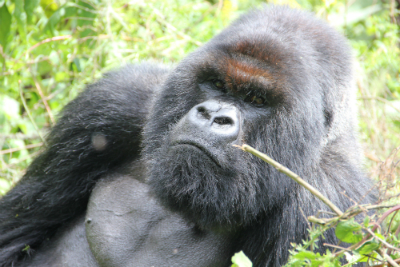 Pablo’s group of mountain gorillas, which the Dian Fossey Gorilla Fund has monitored and protected for many years, is known for its notably large size of 34 individuals, and for consistent leadership during the past two decades—the longest reign of dominance the Fossey Fund has ever observed—by silverback Cantsbee.

On Nov. 14, Cantsbee turned 36, passing the statistical life expectancy for mountain gorillas and setting a new record as the only silverback known from birth to reach this age. He is one of the last individuals we monitor from the generation of gorillas observed by Dr. Dian Fossey. Fossey gave Cantsbee his name because she believed his mother to be a male until she gave birth. After he was born, Fossey exclaimed, “It can’t be,” from which she coined the name “Cantsbee.”

Other notable gorillas to make it to this age benchmark include legendary dominant silverbacks Titus and Pablo, both of whom died at age 35. Fossey Fund trackers closely monitor Cantsbee every day, noting some visible signs of physical aging but also remarking on his ability to remain a strong leader. Cantsbee still decides the group’s traveling direction and activities, with support from the other silverbacks and members of the group.

“While observing different leaders of the many Karisoke gorilla groups over the years, I’ve always referred to Cantsbee as having the typical attitude of the alpha male, leading the group and being followed by a line of all the group members behind him,” Gorilla Program Coordinator Veronica Vecellio said.

During late August through early September this year, Cantsbee was affected by a respiratory outbreak that occurred among many individuals in Pablo’s group. Trackers were worried about the outbreak, but it resolved without consequence. We were especially concerned about Cantsbee due to his old age, so it was a great relief to see him return to his normal, healthy self!

Change in numbers and range

Pablo’s group, which reached a record high of 65 gorillas in 2006, is now composed of 34 gorillas, after Musilikale’s group split off in April 2013. Seven gorillas left Pablo’s group during that time to follow the young silverback, who is currently still leading a successful group.

In recent years, Pablo’s group established its core home range on the high land on the Karisimbi volcano, an area known for ravines, steep slopes and cold weather, which means our Pablo group trackers have to overcome large physical obstacles to reach the gorillas. “I am very impressed by how they keep working hard to overcome all the challenges for the sake of gorillas. Among others, I salute two major skills they have: being able to expertly identify all the gorillas in the group and knowing exactly where big ravines can be crossed and other geography of the area,” Research Assistant Jean Paul Hirwa said. “These abilities require very experienced trackers, and the Pablo team is very helpful for training new trackers.”

During recent months, Pablo’s group shifted its home range to the west side of Karisimbi, an area previously used by one of the tourist gorilla groups: Susa. It’s possible that the shift occurred in order to minimize the competition with many groups that live on the eastern side of the large valley between the Karisimbi and Visoke volcanoes.

Pablo’s group has experienced some changes in composition over the past year due to normal demographic events. Aside from the split of Musilikale’s group, another silverback left to become solitary. Only two births were recorded and unfortunately both died within the first six weeks of life, most recently Turimaso’s first infant on Oct. 30.

The five blackbacks of the group occasionally partake in these play sessions as well. However, they ordinarily play among themselves because of their strength and size. “It’s very hard to stay out of their way, and they run from one side of the group to the other for hours at a time,” Vecellio remarked.

Along with being a strong leader, Cantsbee is known to many as an active and responsible father. Fossey Fund President and CEO Tara Stoinski, Ph.D., remembers seeing Cantsbee “babysit” five or six infants at a time while their mothers were off foraging.

“One of my favorite stories was one told to me by a research assistant. One day, Cantsbee was being uncharacteristically aggressive and pig grunting at every infant gorilla that approached him. After the infants had avoided and passed him, he finally got up and left. The assistant was able to see he was sitting next to a snare, and her impression was that he was protecting the infants from it,” Stoinski said.

Among the adult gorillas, there are four silverbacks in the group, all of whom are very engaged in supporting Cantsbee for group protection. Number-two silverback Gicurasi, Cantsbee’s 19-year-old son, challenged Cantsbee for dominance for many years, but the two have since established a peaceful dynamic. The other silverbacks are Kureba, who is active in daily group activities and social interactions, and Ishavu. There are 10 adult females, six of whom transferred from Susa’s group over the years, and four of whom were born into the group—likely Cantsbee’s daughters.

As it is the largest and longest-established group of individuals we monitor, we have detailed knowledge of Pablo’s group from years of continuous observation. Analysis of long-term genetic, personality and behavioral data from Pablo’s group allows unique insight into the individuals who make it up and, in large part, into the species as a whole. “This group of data will help us understand Cantsbee’s ‘secret’ of what makes a silverback a successful leader over such a long period of time,” Research Associate Winnie Eckardt, Ph.D., said.

Fossey Fund staff is happy to see Cantsbee and Pablo’s group where they are today, and we are excited to see Cantsbee’s children grow, some hopefully to be as successful leaders as Cantsbee has been.