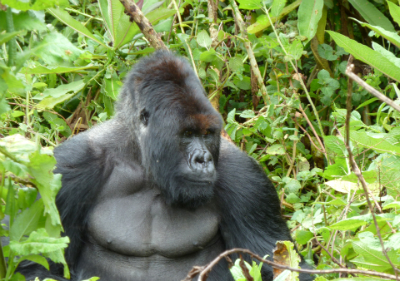 The dominant silverback Inshuti interacted with Kuryama’s group this afternoon, September 13. At 12:30 pm, Inshuti approached Kuryama's group alone, without any of his four females (there are no other adult males in his group). Inshuti's trackers reported that he had walked about 150 meters from his group, whose members continued to rest during most of the interaction.

Kuryama's group moved into an open area, where dominant silverback Kirahure and Inshuti displayed at each other for probably 10-15 minutes. Many other animals were close to Inshuti as well, especially the male infant Jyamubandi and the blackback Igihozo. The group’s other silverback, Vuba, stayed toward the rear, strut-stancing but not actively participating in the interaction initially.

After this initial encounter, Kuryama's group began to move off, pushed by Inshuti, who followed them. He was approached by Igihozo, Jyamubandi, and later Vuba. but Kuryama's group remained surprisingly calm, resting and feeding about 20 meters from Inshuti. At one point Inshuti came quite close to the adult female Ukuri, subadult male Tetero, Jyamubandi, and female infant Dukore and displayed at them. They then moved away, following Kirahure and Vuba. 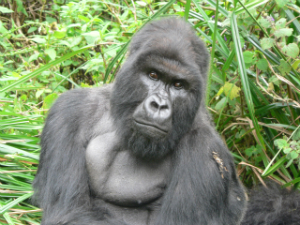 Inshuti remained behind the group until at least 2 pm. Shortly before 2 pm, Inshuti's group joined him at the interaction site. His group also seemed very calm and uninterested in Kuryama's group, except for young female Nyandwi, who climbed a tree to look at them for several minutes. Kuryama’s group continued to move off, and when I left the two were about 75 meters apart. Several trackers and a data technician stayed behind to continue watching the interaction.

At no point did we ever observe any of the males touching each other, and there were no injuries, only displays. Tetero hit Inshuti on the back at one point, but Inshuti ignored him. 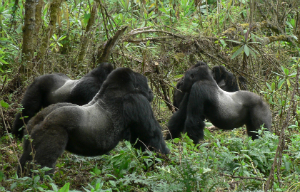 Interactions between gorilla groups or between a group and a lone silverback consist of confrontations between the adult males, who may assume the defiant “strut stance,” beat their chests, and thrash vegetation to display their strength. They may or may not engage in violent contact such as biting. Sometimes females take the opportunity to change groups while the males in their groups are distracted, but that did not occur in this case.