Silverback Kirahure not found since Sunday

On Monday, Fossey Fund trackers were unable to locate dominant silverback Kirahure, who has been recovering from wounds on his head since the beginning of August (see earlier blogs). He had been seen on Sunday, when he engaged in normal activities, though was still quite thin. Kirahure is the leader of Kuryama's group, one of the mountain gorilla groups followed daily by our staff. 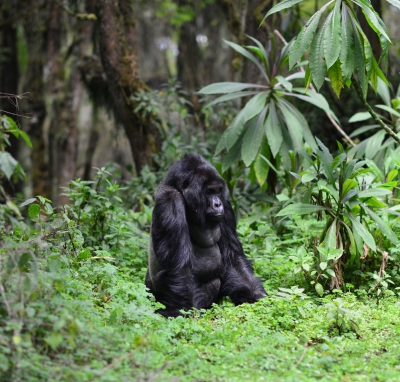 Today and yesterday, despite intensive searching, he was still not found. His group was calm, with silverback Vuba, who is of similar age, in place. Today's search involved an extra large team of 24 people, including nine Karisoke trackers and 15 additional national park authority personnel.

Regarding the former members of Gushimira's group (see previous blogs), the three dispersed members have also still not been located. Four of the members are still with new silverback Giraneza (with the final member still in Ntambara's group). We are tracking the new group from a much greater distance than usual, due to the aggressive reactions of Giraneza to human presence.