Two lone silverbacks joined forces and attacked 24-year-old dominant silverback Inshuti today, reports Fossey Fund Field Data Coordinator John Ndayambaje. Inshuti sustained three large bite wounds on his head and one on his neck. Veterinarians Dr. Dawn Zimmerman and Dr. Jean-Felix Kinani (of the Mountain Gorilla Veterinary Project), along with a team of Karisoke trackers, will trek to the group tomorrow to assess the damage and potentially carry out a medical intervention. Karisoke researcher Winnie Eckardt, PhD., will join the team to collect behavioral data and fecal samples for her ongoing study on stress in the mountain gorillas. 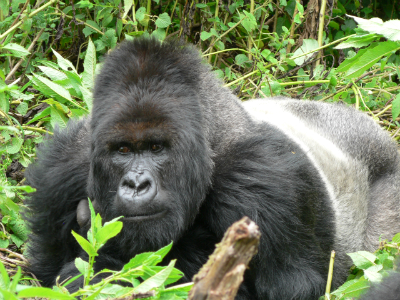 Ndayambaje reported that the interaction began in the Tamu area between Mount Visoke and Mount Karisimbi at 11:24 a.m. and lasted almost 2-1/2 hours, until the pair of silverbacks retreated from the group at 1:49 p.m. The unidentified silverbacks displayed 19 times throughout the first half of the interaction, pushing Inshuti and his group to travel over 1.5 kilometers through the forest, in an attempt to get away from the intruders. Inshuti displayed three times before the physical interaction began, when he sustained the bite wounds.
With the absence of any other males in the group to help Inshuti, the three females, Shangaza, Taraja and Nyandwi, participated in the interaction in defense of their infants and injured leader. The two infants remained on their mother’s backs throughout the entire interaction — which the field staff found particularly interesting because, at almost 3 years old, both offspring are at an age that they would not normally need to travel on their mothers' backs.

Females Shangaza and Taraja reportedly charged the two silverbacks twice. On the first occasion, they charged both silverbacks jointly, causing the males to turn and retreat. Next, they charged only one of the silverbacks, at which point, the other male charged the females, who then retreated. During this time, Inshuti attempted to display, but was too weak to chest beat and was only able to display with hooting vocalizations. Inshuti group trackers report that the pair of silverbacks are 350 meters away from the group at this time. Inshuti is said to be in critical condition and appears to be in quite a lot of pain.
Although the attackers are not yet officially identified, the field staff believes these two silverbacks could possibly be 15-year-old Gushimira and 14-year-old Twihangane, the gorillas that dispersed from Pablo group on August 16. However, there are currently six lone silverbacks that are monitored by the Karisoke Research Center in this area and realistically, the aggressors could be any of them. Along with the medical intervention team for Inshuti, another team of trackers will enter the forest tomorrow morning to track the silverbacks and attempt to identify the individuals.
Gorilla Program Manager Veronica Vecellio says that “this is not the first time that Inshuti has been involved in such an aggressive interaction — he suffered serious wounds from both Beetsme and Pablo (late silverbacks) in the past. He is a strong individual and he will likely bounce back from this.”

Our Karisoke staff is, of course, enormously concerned and hopes that Inshuti will recover from these injuries. Without Inshuti, this group would be in disarray, with the two infants of the group in an extremely vulnerable position.
An account of tomorrow’s observations and possible medical intervention will be reported promptly.
Jessica Burbridge, Field Communications Officer