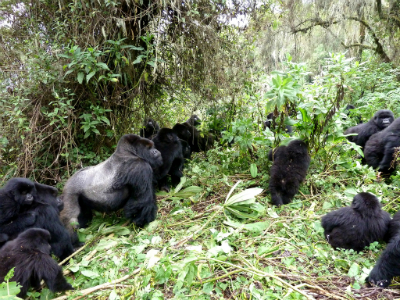 The Dian Fossey Gorilla Fund’s decades of observing mountain gorillas have shown us that interactions between gorilla groups often do not end after a single fight. This was the case when Pablo’s group and Susa’s group, the two largest groups of gorillas in the Virungas, interacted in August. It was almost a struggle to keep up with the many new developments that resulted, as females transferred in and out of Pablo’s group, and a young silverback split off to try his luck at forming his own group. Pablo’s group lost four females, but acquired two females from Susa’s group. Things seemed to have settled down after that, but just a couple of weeks later, Pablo’s group was involved in yet another interaction.

On Aug. 21, Fossey Fund trackers found female Irahirwe, one of the recent transfers to Pablo’s group, with Musilikale’s group. Musilikale, a 15-year-old silverback, formed his own group this past April, when he split off from Pablo’s group and took six other gorillas with him, including a female, a young silverback, and several youngsters.

Gorilla Program Manager Veronica Vecellio reports on the latest situation: “Trackers found the interaction site with blood on the ground. When they found the groups, they saw Irahirwe with Musilikale very far from Pablo’s group. He was displaying a lot to her and moving nonstop.”

Although silverbacks from both groups were injured, trackers report that all of the wounds were superficial and the silverbacks will recover. 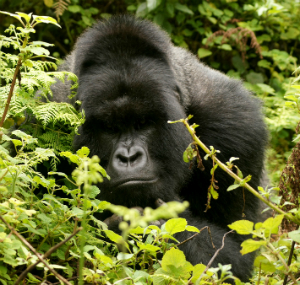 Although we are sorry to see Pablo’s group lose yet another female, this latest transfer is good news for Musilikale’s group, which until now, has only had one adult female, Mahane. At the age of 8 years old, Irahirwe could be another good mate for Musilikale.