Silverback Musilikale, who had been leading a group split off from the large Pablo’s group (led by elder Cantsbee) was not seen today, and the six gorillas that were with him have rejoined Pablo’s group. 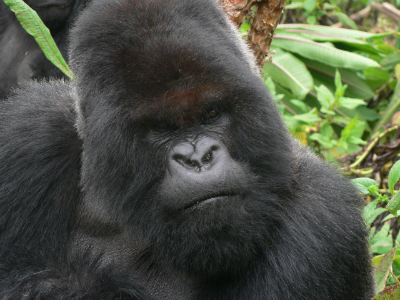 Yesterday, the two groups were still separate and apart, quite distant from another. Surprisingly, this morning Fossey Fund trackers saw all the gorillas back in Pablo’s group, except for silverback Musilikale, who was not seen at all. We assume he is alone and somewhere around the group.

The question now is whether Musilikale will safely re-enter the group and try again to get some gorillas to follow him? Or will he live as a solitary silverback? And more importantly, what will happen to the group when ailing Cantsbee loses the ability to lead the group? Will the group split or will it still be compact?

For sure more surprises will come in the near future regarding all of these situations.

Musilikale was one of the best candidates to became the dominant silverback so we can’t exclude that, even as a solitary male, he could re-enter the group when a time comes again to try again his fortune.