Fossey Fund field staff are very concerned about the well being of 24-year-old dominant silverback Ugutsinda, who is the leader of the Ntambara group of mountain gorillas, one of the larger groups we monitor regularly. He suffered from severe illness in February and was left behind by his group in early March. However, he gradually recovered and rejoined his group on March 17, at which point we hoped a full recovery was underway. 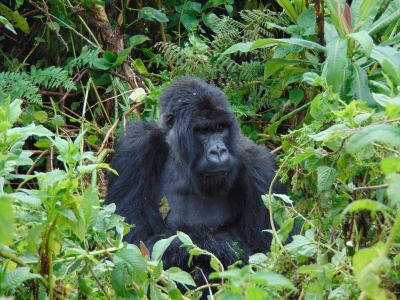 But, on May 11, he was missing from his group again, then seen far from the group on May 16, at which point he was visibly ill and moving slowly, in addition to having lost weight. On May 17 he was seen again alone, vocalizing as though to find his group. Since then he has not been seen (as of May 20).

Ugutsinda’s health and whereabouts have required extreme efforts on the part of our field teams, with two to three extra teams often searching for him, sometimes with the additional of personnel from the Rwanda park authorities (RDB).

With the recent deaths of other dominant and leading silverbacks, the status of Ugutsinda has taken on very high importance. In fact, his group is named after former leader Ntambara, who disappeared in February and is presumed to have died.

Stay tuned for updates on this blog, since the situation may change quickly.