The Fossey Fund is saddened to report that dominant silverback Ugutsinda was found dead this morning by our trackers, on what would have been his 25th birthday. We have been monitoring him for an undiagnosed illness since February. He managed to keep up his normal activities for the most part, but he was losing weight and looked to be in poor health. Periodically he was not seen with his group, but then continued to return and resume his dominance. 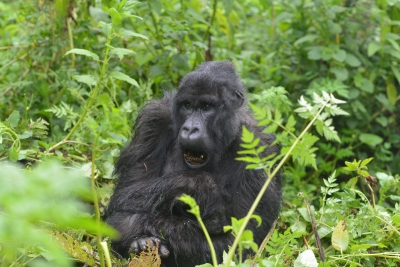 Ugutsinda's group formed in 2008 and was originally led by his brother, Ntambara, who disappeared in February, also following an undiagnosed illness. He is presumed to have died, although the body was not found. Luckily, the group still has silverback Twibuke, who has been leading the group at times when Ugutsinda was unable to.

Ugutsinda was born in a group originally monitored by Dian Fossey, called Group 5. His father was the well-known silverback Pablo. His brother, silverback Wageni, also died this year, but there are still two sisters living, in different groups.

Ugutsinda's body is currently being recovered for necropsy, which will be conducted by Gorilla Doctors. We will post a full story once that information is available.