Fossey Fund gorilla trackers are happy to report that dominant silverback Ugutsinda, who leads Ntambara's group of mountain gorillas, is back in his group today after some days of being alone and appearing ill. In addition, his health appears to be improving. 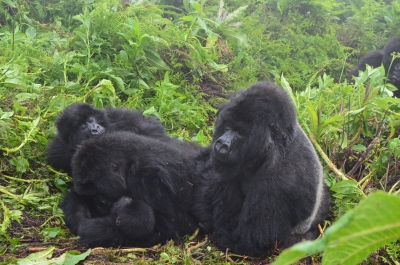 However, two females from the group are missing, and it may be that they have transferred to another group (Gushimira's) after an interaction. But this group has not been seen for several days, even with enhanced teams searching for them.

In addition, elderly female Maggie is still traveling alone. We have a special team following her and she appears to be fine, but having her alone for extended periods in the forest is not an ideal situation. She runs away from our trackers, so we follow her at a distance.