At the end of February, Umurava, one of the subordinate silverbacks of Pablo’s group died, after a series of adventures. Pablo’s group is an enormous group of mountain gorillas that our staff at the Karisoke Research Center track and monitor.

Although we label Umurava as a “subordinate silverback” (a scientific term to indicate an adult gorilla male who is not the most dominant in the group) we all remember him as one of the main characters of the complex dynamics in Pablo’s group, especially during the past year.

Pablo’s group reached the amazingly high number of 65 gorillas last year. It is easy to imagine the hard tasks of all silverbacks in managing such a crowd and in protecting it. Although he was not the dominant silverback, Umurava played an essential role in keeping the group cohesive and in protecting its members against all the natural and unnatural challenges that they had to face. He was first in line in all interactions with other groups, assisted the more dominant silverbacks Cantsbee and Pablo, and several times even faced off alone with lone silverback Inshuti, who challenged the group in various circumstances. 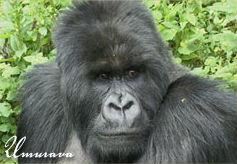 Last year Umurava astonished everybody when, after spending two weeks separated from the group, he came back with Urugwiro, a juvenile who had been lost from the group after a bad encounter with poachers when the group ranged into Congolese territory. The little Urugwiro was all alone, trying to follow the trail of the group when he met Umurava and they then came back together.

As conscientious leader of the little subgroup, Umurava was very protective, especially with the infants, often keeping them in close physical contact. In contrast, he was very aggressive toward humans coming too close. Two of the infants with him, Icyi and Iraduha, unfortunately died because the premature separation from their mothers deprived them of basic nutrition. But Umurava did his best as substitute parent. Icyi was already extremely weak when she followed Umurava and Iraduha kept following the little group for several days before becoming weak as well. On the day before Iraduha’s death, Umurava was waiting for him as the little one followed slowly from behind . On the nest site it was clear that Umurava had slept close to one of the infants, probably Iraduha, to keep him as warm as possible. After these adventures, in December, Umurava returned to the main Pablo group 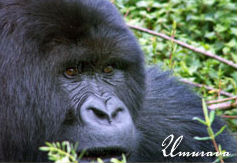 At the end of February a tragic sequence of events led to Umurava’s death. Once again he left the main group with some other individuals and after a week of hard searching by our trackers, he was found near death with a seriously infected wound under his chin. Veterinarians from the Mountain Gorilla Veterinary Project immediately responded with emergency care, but Umurava did not recover. The other gorillas who had ventured off with him were already back in the main group, and one had joined up with the lone silverback Inshuti.

The cause of Umurava’s serious injuries remain unknown, They may have been the effect of a bad fight with Cantsbee, the dominant silverback of Pablo’s group, or a fatal encounter with his rival Inshuti, who at the end succeeded in gaining one of the Pablo group females. A necropsy revealed an advanced case of pneumonia, which may have been secondary to the wound or may have been a development of a respiratory illness.

We will all miss the presence of Umurava during our visits to Pablo’s group, but we imagine he will be missed most by Cantsbee, Pablo, and all gorillas that he lived with, since they have lost a fundamental figure in the group’s protection.

Umurava was born on January 4, 1986, into what was then known as Group 5; his mother was Pantsy and father was Ziz (the dominant silverback of Group 5 at that time). Following the death of Ziz on May 21, 1993 , Group 5 split and became Pablo’s and Shinda’s groups. In Pablo's group the only living member of Umurava’s family is his youngest brother Gicurasi, now a blackback. Another younger brother, Turatsinze, left the group on October 2006 and is now a lone silverback.