Silverback Urugamba, the dominant and only adult male of the his group, was found very weak this morning by the Fossey Fund’s trackers. He was still in his night nest, while the rest of the group was a few meters from him feeding. During the entire morning he didn’t eat a bite of vegetation and moved less than 10 meters. The few meters he did walk were taken very slowly, in small steps. 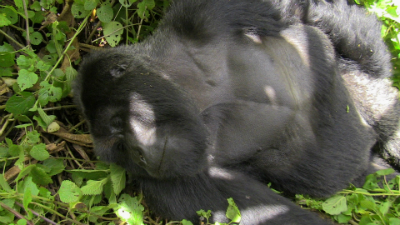 The other gorillas of his group were resting with Urugamba when they were not feeding. Subadult male Inkumbuza was seen grooming him, while female Pasika was at his side in physical contact.

Fossey Fund researcher Samedi, who was initially in another group, came to observe around noon and found the silverback in the same conditions described by trackers.

We are, of course, concerned as he is the only adult male of his group. The veterinarians from Gorilla Doctors were already involved in another case elsewhere (illnesses in Sabyinyo group) and were not available today, but the plan is for them to visit Urugamba tomorrow. If we are lucky, he will have improved, but if not, an intervention will be planned.