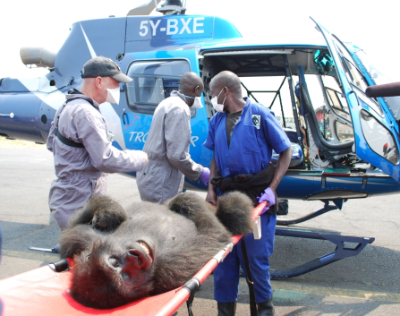 When the helicopter touched down at the Gorilla Rehabilitation and Conservation Education (GRACE) center on Sunday afternoon, for the sixth time in two days, a long journey home finally came to an end.

Pinga, Serufuli, Tumaini, Ntabwoba, Itebero and Dunia, the six orphaned Grauer’s gorillas who had been cared for in Rwanda for many years by the Dian Fossey Gorilla Fund and the Mountain Gorilla Veterinary Project (MGVP), were successfully transferred this weekend back to the Democratic Republic of Congo (DRC), where they had originally been confiscated from poachers.

According to the Fossey Fund’s President and CEO Clare Richardson, “The airlift of these Congo gorillas back to their homeland this weekend is a remarkable example of partnership and cooperation in the name of conservation. The authorities of both Rwanda and DRC joined the Fossey Fund, the MGVP, the International Fund for Animal Welfare (IFAW), Disney’s Animal Program experts, and Tropic Air Kenya to make this complicated but critical move happen. Now the gorillas can start their new lives in the right place, where they will be prepared for eventual return to the wild. This is not just a happy ending – it’s a very happy beginning!"

The six gorillas, aged 5-10, came into the care of the Fossey Fund and MGVP at a temporary facility in Kinigi, Rwanda, because at the time of their rescue the eastern DRC lacked an appropriate facility and posed severe security threats. Throughout the years, an extraordinary joint conservation effort between the two countries saw the gorillas rehabilitated in Rwanda while plans for their long-term future were being made across the border. Once the state-of-the-art GRACE facility opened last year in eastern DRC, the gorillas could at long last return home.

“We are thrilled to finally see these gorillas where they belong,” said Juan Carlos Bonilla, the Fossey Fund's vice president for Africa programs. “This is a victory for conservation as well as a wonderful example of how two countries worked together to achieve such an important goal.”

The transfer required extensive preparations and perfect coordination among many actors both in Rwanda and the DRC. The logistics of the operation were organized by Katie Fawcett, Ph.D., director of the Karisoke™ Research Center in Rwanda, founded by Dian Fossey in 1967. “It is with great anticipation that I will follow their continued rehabilitation and journey back to the wild in the forests of eastern DRC," she says. "I look forward to hearing reports of the gorillas exploring the forest, foraging for natural food, building nests and forming new social relationships. Success will be measured by the return of the gorillas to the wild and the birth of the next generation.”

Tammie Bettinger, senior research biologist with Disney’s Animal Programs, and others from Disney including two veterinarians, came a few days in advance to help. The veterinarians began by giving health checkups to the four older gorillas among the seven already at GRACE.

Ihomé, the latest infant to have arrived at GRACE earlier this year, had ended his quarantine two days before and joined the group of gorillas already in residence. Soon they would all catch a glimpse of six new companions. 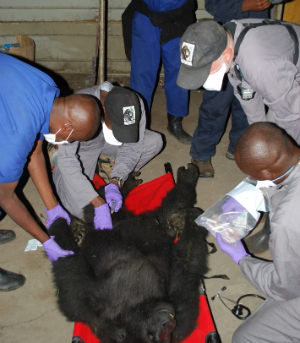 At Kinigi, on Friday afternoon, Pinga, Serufuli and Tumaini were darted with a sedative in their night-house, then received thorough checkups and each was placed in her own crate. On Saturday at 4 a.m. they were loaded onto separate trucks and started the one-and-a-half hour journey to the DRC border and then to the nearby Goma airport, where the trucks parked in a hangar.

The border crossing itself was an achievement, as 16 people and seven vehicles with the gorillas made it in just ten minutes – at a crossing which is notorious for its red tape. The Fossey Fund staff had worked hard to make sure the paperwork was in order, as any one of the many authorities at the airport could have interrupted the operation if they had not been well informed about what was going on.

A helicopter was on standby to transport the gorillas one by one to GRACE, on 45-minute flights. The North Kivu provincial minister for the environment and representatives of both the Rwandan and Congolese park authorities were on the tarmac at the Goma airport to see the young gorillas go back home.

Pinga was the first one to be sedated, receive a last-minute checkup and then be loaded onto the helicopter, accompanied by a veterinarian from MGVP. Ben Simpson, the Tropic Air Kenya helicopter pilot, landed in the designated spot, but reported that he had seen a place to land nearer to GRACE, so they went again with Pinga and arrived safely. The closer location was much less stressful for gorilla and humans alike, especially since two of the gorillas were quite large. Pinga had woken up during the flight, so upon landing she was again mildly sedated.

"When I saw the first helicopter come over the mountains, I had tears in my eyes,” said GRACE Manager Luitzen Santman. “The rescued gorillas were coming home to Congo, the land of their ancestors.”

The 180-lb gorilla and her 200-lb crate were carried directly into the GRACE night-house, with Pinga on a stretcher. She came to after a short while. In the meantime the helicopter flew back and forth between Goma and GRACE, carrying first Serufuli and then Tumaini, each accompanied by another vet. By late Saturday afternoon, after a very successful day, the three gorillas were all awake and reunited at GRACE. Pinga made a night nest in the night-house and Tumaini played a little.

The four oldest GRACE gorillas, who were in an enclosure adjacent to the night-house, could see the new arrivals through the bars and were very curious about them — especially Mapendo, the oldest one, whom the caregivers call “the queen.” When Pinga vocalized, the hair on the four older gorillas stood on end and they ran over to the night house door to try to get a peek at her. Pinga did not seem sure how she felt about them. Finally, both groups settled down and they all slept well through the night without any incidents. 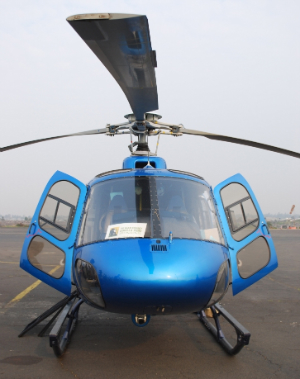 At Kinigi, meanwhile, Ntabwoba, Itebero and Dunia spent quite a restless Saturday morning, searching everywhere for their friends. In the early afternoon they were taken into the night-house and the same process as the day before began again. Early Sunday morning they were transported to the DRC and then flown one by one to GRACE throughout the day. The vets on the Goma side tried a different sedative, which worked much better so they were able to transport the gorillas from the helicopter to GRACE without immobilizing them again, as had been necessary with the first three arrivals. Dunia was the last one to arrive and conclude this momentous operation.

Among the first three arrivals from Kinigi, Pinga seemed to be having the hardest time adjusting, but she is coming around and bonding with her caregivers. Pinga, Serufuli and Tumaini all enjoy looking through the bars at the younger GRACE gorillas. Serufuli did a lot of displays toward them, which Bettinger termed “appropriate,” but hated the sound of the doors. The caregivers will be helping her get used to it. The three gorillas who arrived Sunday were still groggy from the sedative that afternoon but were reported to be recovering nicely.

The helicopter transfer of the six orphaned gorillas was funded principally by IFAW. Organized by the Fossey Fund, the move also included substantial assistance from the Rwanda Development Board (RDB), L’Institut Congolais pour la Conservation de la Nature (ICCN), Disney’s Animal Programs, MGVP and Tropic Air Kenya. Top officials from both Rwanda and the DRC were present on both days at the border to oversee the smooth transition.

Once the six gorillas had crossed the border, Rica Rwigamba, the head of Tourism and Conservation for RDB, the Rwandan park authority, handed the paperwork to Chantal Kambibi, minister of the environment for the DRC's North Kivu Province, in a no-man's-land between the two countries' border posts and the two held a joint news conference celebrating the close collaboration that made the gorilla transfer possible. This was especially important as not long ago, armies and refugees had marched in both directions at that border.

“We were happy to care for these gorillas in Rwanda but are now passing this great responsibility to our neighbors,” said Rwigamba.

It was a challenge that Kambimbi readily accepted. “We are very committed to conservation,” she said. “We will do whatever we can to see these gorillas thrive, as well as prevent other infants from falling victims to poaching.” 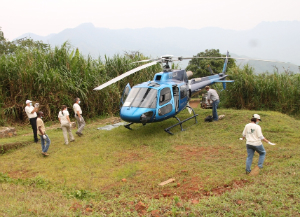 The GRACE center is the first facility of its kind in east central Africa, with room for up to 15 young gorillas to live in species-typical groups and roam through 350 acres of natural habitat, in the hope of eventually reintroducing them to the wild. The site was donated by the Tayna Center for Conservation Biology (TCCB) and is located just adjacent to the Tayna Nature Reserve, near the village of Kasugho, DRC. TCCB is an outgrowth of the unique Tayna Nature Reserve, now one of a network of community-based reserves in eastern Congo, forming a wildlife corridor between Maiko and Kahuzi-Biega national parks and covering nearly the entire range of the endangered Grauer’s gorilla.

GRACE was initiated by the Dian Fossey Gorilla Fund International at the urging of the Congolese park authority (ICCN), with funding from the U.S. Fish and Wildlife Service; design and construction assistance from Disney’s Animal Programs; and technical expertise from Pan African Sanctuary Alliance (PASA). The Fossey Fund and the Walt Disney Company are the first of several partners that will continue long-term funding and operation of the center.

In April 2010, four other orphaned Grauer’s gorillas were transferred to GRACE from Goma, and earlier this year three more infants were rescued from poachers and brought to GRACE. The gorillas transferred this weekend will for now enjoy the company of two of their beloved and trustworthy Rwandan caregivers, as they explore their new home and await integration with the other gorillas.