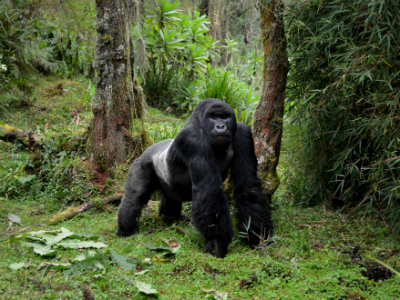 Since his group dispersed in 2013, the solitary male mountain gorilla Giraneza is trying harder than ever to form his own group, with widespread implications. Giraneza’s main method has been to interact with existing groups, and his attempts culminated in the death of dominant silverback Ugenda at the beginning of April. As a consequence of this, another silverback died and the rest of the group dispersed.

Giraneza is a 20-year-old silverback who was born in Pablo’s group on Oct. 25, 1994. He began expressing his edgy temperament as he approached maturity. Giraneza had a strong bond with the prior dominant silverback Pablo, who was a very determined and competitive silverback — even at old age. Based on the similar dispositions of the two silverbacks, Fossey Fund staff believe Giraneza may have “inherited” his determination and competitiveness from Pablo.

In December 2007, at a relatively young age for a silverback, Giraneza made his first attempt to form a group, with a female named Taraja. The couple left Pablo’s group and stayed together for one month, until Taraja left him, alone again, to move to another group. He then decided to rejoin his natal group and was re-accepted, likely because of his bond with old Pablo.

In July 2008, Giraneza left Pablo’s group after an interaction that ended the life of the dominant silverback. Giraneza tried to rejoin Pablo’s group again later that month, but this time he was not accepted and, after only one day, he left the group for good.

After becoming a solitary male, Giraneza grew in size, which often happens when males go off alone. He continued to interact with groups unsuccessfully during this time. Finally, in February 2012, after becoming a large and fully mature silverback, he interacted successfully with a group and gained two females. One of the females was Taraja, the same female he briefly formed a group with in 2007. The group stabilized and Taraja gave birth one year later.

Giraneza’s luck ended in June 2013, during an interaction that resulted in the loss of a female and the infanticide of Taraja’s infant. Taraja stayed with Giraneza for just a few more months before transferring with the former lone silverback Mafunzo (who formed a group in January 2014), once again leaving Giraneza alone.

After a period of less activity, Giraneza became active again at the end of 2014, and started searching for females, targeting Ugenda’s group. This was a time when Ugenda’s group had recently gained gorillas from the former Bwenge’s group (following Bwenge’s death). 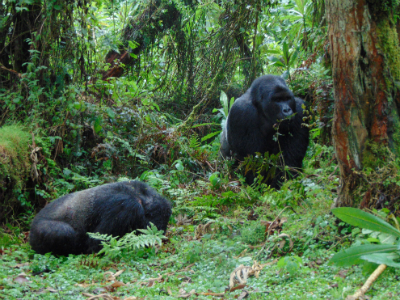 Giraneza wasn’t successful in his first attempt, but he continued to try to gain females from Ugenda’s group. In February of this year, after an interaction between Ugenda’s group and Giraneza, elder female Maggie left the group. Giraneza subsequently tried to follow Maggie once she was by herself, but she avoided the silverback and has been alone ever since.

On April 7, Giraneza interacted with Ugenda’s group with more force and aggression than in previous interactions. During the incident, Giraneza fatally injured the dominant silverback Ugenda, continuing to display and fight after Ugenda was unable to fight back.

Ugenda’s death was a powerful blow to his group, many members of which had recently lost their previous leader, Bwenge, in October. The situation quickly got worse when Wageni, the other silverback in Ugenda’s group, became ill and died. Though Wageni’s death was not a result of injury, his deterioration seems to correspond with stress from the interaction.

Despite having ultimately overthrown two silverbacks, Giraneza was still alone, and female Ukuri led the rest of Ugenda’s group; this was the second time a female gorilla led a group for many consecutive days, following Maggie’s month-long leadership after Bwenge’s death.

Giraneza was visibly stressed and continuously made calling vocalizations. On April 12, he interacted with Ugenda’s remnants and gained one female, Inziza, temporarily claiming his own group. The two gorillas stayed together alone until Giraneza again approached the former Ugenda’s group on May 1 and gained two other gorillas. Then, on May 4, there was another turn of events when Giraneza’s new group interacted with Gushimira’s group. All the members of Giraneza’s group transferred, leaving him alone yet again.

The Fossey Fund has continued to follow Giraneza in the following weeks. During this time, he has followed Gushimira’s group and has appeared distressed, not surprising considering the series of events. Although the events involving Giraneza have been difficult to watch, it has been extremely interesting for the Fossey Fund to record all the associated gorilla behaviors and to extrapolate important insights about the gorilla social structure. As the mountain gorilla population increases, due to daily protection and monitoring, stress induced by intense male competition is having a major impact and may significantly affect their future.