Some Interesting Dynamics in Kuryama's Group 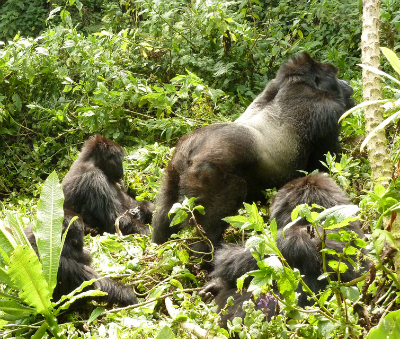 Yesterday I observed some interesting dynamics in Kuryama's group which made me think. Silverback Vuba, notoriously the second silverback of the group, was showing off his physical power to the females with strong and frequent displays to them. The displays always ended with him resting, surrounded by all group members, while the dominant Kirahure was a few meters apart in the company of only juvenile Rugira.
Obviously this isolated episode does not lead to any conclusion about dominance challenge, but for sure it shows how flexible are the dynamics and relationships among the females and the two adult males. A few months ago we also observed Vuba leading the group during moving, while Kirahure was behind him trying unsuccessfully to pass in front.
Veronica