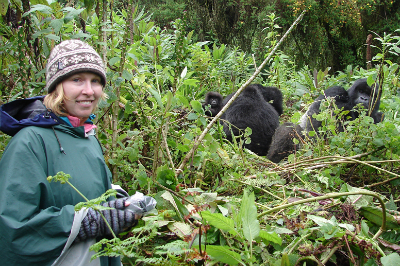 On the first day of class, Stacy Rosenbaum took a seat among 100 or so other students in her primate behavior course at the University of Wisconsin at Madison. A psychology major, she had registered for the course on a whim. Professor Christopher Coe stood up and addressed the students, saying “For most of you in this room, this will be just another class. But there are one or two of you for whom this course will change your whole life.”

Rosenbaum didn’t know it at the time, but she was one of those select few. Smiling at this memory, Rosenbaum remarks that her professor’s statement has stuck with her throughout her journey in the field of primatology.

The young scientist completed her undergraduate senior thesis on cotton-top tamarins (a small New World monkey) in 2001. Fresh out of college, Rosenbaum’s first field research in primatology brought her to a far-flung corner of the world to study the silky sifaka, a rare species of lemur. She worked in northeastern Madagascar’s remote jungles for six months, serving as a research assistant for a Ph.D. candidate.

Returning to the United States in 2002, Rosenbaum took a position in Stanford University’s neuroscience department, gaining valuable laboratory experience in biomedical research. But it was a 2002 animal behavior field science course in Kenya (through Georgia Tech University) that proved to be the most influential experience in her young career. The instructor was none other than the Fossey Fund’s own resident primatologist Tara Stoinski, Ph.D., the Fund’s McGrath Chair of Research and Science.

A few years later, when Dr. Stoinski received funding for a new study on the social dynamics of male mountain gorillas she wrote to Rosenbaum, offering her a job as a research assistant. Dr. Stoinski had been impressed with her student, and recalls that “Stacy’s love for Africa and wildlife was quite evident.” So, from June 2003 to December 2004, Rosenbaum began work for the first time at the Fossey Fund’s legendary Karisoke™ Research Center in Rwanda. And this year she has come back to Karisoke to lead a study on adult male gorillas’ relationships with their offspring.

When she first arrived in 2003, Rosenbaum was trained by Karisoke Research Assistant Prosper Uwingeli, who is now employed by the Rwanda Development Board as chief warden for Volcanoes National Park. Uwingeli knew the gorillas intimately and was a great mentor and friend to Rosenbaum. He taught her about the gorillas’ behavior, helped her to learn how to identify them individually and showed her the secrets of picking up on subtle nuances in interactions. Rosenbaum credits Uwingeli with helping her to develop the sharp, observant eyes that are so critical to an animal behavior scientist.

The year and a half that the young scientist first spent at the Karisoke Research Center proved to be a turning point in her career. She helped to lay important groundwork for Dr. Stoinski’s study of male-male social relationships. And, as it turned out, her male-focused data collection would eventually give birth to her own research initiative in paternal investment and the male-infant relationships among mountain gorillas.

Rosenbaum is a woman who knows what she wants and goes out and gets it. Having always admired the work of renowned primatologist and UCLA professor Joan Silk, Ph.D., she wrote to her that she was seeking an advisor, a mentor to guide her on her primatology path. Fast forward three years and Rosenbaum is now elbow-deep in her doctoral program at the UCLA Center for Behavior, Evolution and Culture, with Dr. Silk serving as the primary advisor on her committee. 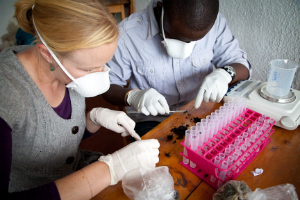 Rosenbaum’s current research has pulled her back into the world of the male mountain gorillas, this time with her own exceptional research assistant, Jean Paul Hirwa, by her side. The research broadly deals with the evolutionary question “why do males develop relationships with their offspring?” According to Rosenbaum, “we believe that hormones probably play a huge role in this. Because of what we already know about hormonal mediation of social relationships in other species, a good place to start is by looking at the hormones prolactin and testosterone.”

Generalizing across a broad spectrum of primate species, males with higher prolactin levels tend to be more involved parents. And on the other end of the spectrum, males that show lower levels of prolactin don’t tend to be very involved parents at all. Often in monogamous species, humans included, a male’s testosterone level will decrease around the time his offspring are born. The testosterone hormone “tends to make you aggressive. And it’s not to your benefit to be aggressive when you’re around your own offspring” Rosenbaum adds.

However, gorillas are not monogamous and don’t tend to exhibit the high level of paternal investment that is seen in monogamous primate species. Monogamous species are usually characterized by less sexual dimorphism, meaning difference in male vs. female body size. But, gorillas are the most sexually dimorphic primate species, with the males typically weighing hundreds of pounds more than the females at their mature size.

While the dominant silverback of a group maintains mating rights and more than likely has sired the highest number of offspring within a particular group, there still remains a level of uncertainty in paternity. Of course, it doesn’t make sense for a mountain gorilla male to invest heavily in an infant that is not his own. Considering this paternal uncertainty, Rosenbaum is anxious to discover what their hormone levels will reveal.

Dr. Stoinski adds that “the incredible diversity of the research groups currently at Karisoke — from small single-male groups to large groups with more than five silverbacks — makes right now a wonderful time for Stacy to be exploring this topic. Hopefully her work will shed important light on the roles that males play in the life of an infant and the evolution of paternal behavior.”

In March 2011, the first month after Rosenbaum returned to the mountains of Rwanda, she witnessed an intimate moment that was not only deeply moving for her, but also integral to her research. Tayna, an adult female (whom Stacy had developed a deep affection for almost a decade ago when she was just an infant) had become a mother and was cradling her tiny six-week-old baby. Tayna was seated Indian style and sitting knee to knee was the infant’s father, silverback Inshuti. The primatologist watched, fascinated, as Tayna gently cradled their offspring between their dark bodies and the enormous silverback leaned in close, carefully and curiously grooming his tiny infant with his massive hands.

“No matter how many times you go out there, you see something new and learn something new every single day. There’s just nothing else like it” Rosenbaum says. “It is a rare day when you don’t see something that sends your brain off in different directions… It’s where research ideas come from!”