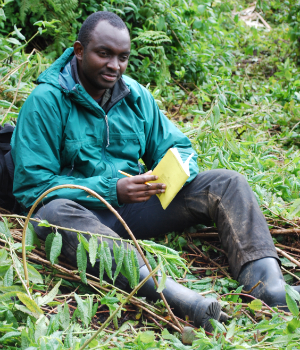 I'm Sosthene Habumuremyi, a graduate student conducting field research at the Karisoke Research Center in Rwanda – supported in part by the Leakey Foundation Baldwin Fellowship Program – and I'm very pleased to be able to share some of my interests with you in my first blog for the Fossey Fund.

For the past two years I've spent hundreds of hours in dense vegetation on the steep, muddy hillsides of Volcanoes National Park, observing and collecting data on the mountain gorillas that Karisoke monitors, for my Ph.D. dissertation on how the socio-sexual behaviors of female mountain gorillas correlate with their hormones.

Among the interesting questions that have been asked about female gorillas is whether they have menopause and miscarriages. Miscarriage among gorillas is an area we are investigating, but currently we have no evidence of it. In the field, no case has been reported as far as I know, though scientists assume that miscarriage is an important component of the long period between births that has been observed in primates. In gorillas this interval ranges from three to 7.2 years. Because we are monitoring the hormones of cycling females around copulations, the resulting patterns will show us what is happening and we'll be able to figure out whether or not we actually have cases of miscarriage. 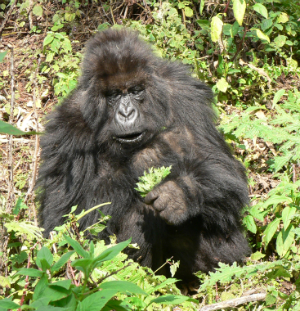 As for menopause among mountain gorillas, this is still being discussed and it will take time to confirm the details because the number of older females in the population is low. In our study, we've been able to sample the last three months of one older female called Tuck, who died at age 38 in September 2010. Her last infant, Segasira, was 5 years old at the time of her death. We hope that analysis of the hormones in her urine and fecal samples and others will shed light on this question.