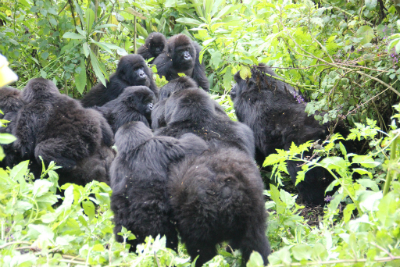 A team of scientists from the Dian Fossey Gorilla Fund, Zoo Atlanta, and the Georgia Institute of Technology have published a new study about ranging patterns of the Virunga mountain gorillas, using the Fossey Fund’s long-term data. The study, published in the American Journal of Primatology, addressed whether the mountain gorillas have changed how they use their forest habitat as their population has increased and how that could impact their conservation.

With the help of conservation efforts led by several partners, including the Dian Fossey Gorilla Fund, the mountain gorilla population in the Virunga Mountains, at the border of Rwanda, Uganda, and the Democratic Republic of Congo, has almost doubled in size from a low of fewer than 250 gorillas in the 1980s to 480 gorillas, according to the last census in 2010. However, their forest habitat is surrounded by some of the densest human populations in Africa, with crop fields planted right up to the boundary of the park.

Fossey Fund scientist Damien Caillaud, DVM, Ph.D., the lead author of the study, said: “The volcanic soil of the mountain gorilla habitat, combined with a humid climate, produces a lot of gorilla food. It can thus probably sustain a high density of gorillas. But historically, the high soil fertility has also attracted large human populations, which has caused the disappearance of most of the forest.”

Although the park still has areas where few gorilla groups range, the human presence and deforestation around the park mean that gorilla habitat is finite, since the gorillas cannot expand to new areas outside of the park.

At the same time, the gorillas put pressure on the forest as they travel in search of food. Scientists expect that a growing gorilla population will lead to increased competition among gorilla groups for food and space. How fast this process will occur is a critical conservation question. Researchers from the Fossey Fund were in a good position to investigate, since the Karisoke Research Center has been collecting data about mountain gorilla movement and habitat use for many years. 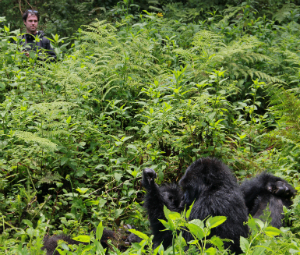 The study, entitled “Mountain Gorilla Ranging Patterns: Influence of Group Size and Group Dynamics,” focused on the movements of 11 gorilla groups — one-fourth of the Virunga population — over the course of 12 years. Scientists looked for signs of an increase in the average group home range size since the 1980s, or evidence that large groups have larger home ranges than small groups, both of which would indicate competition. The analyses revealed no major changes in ranging patterns compared to those reported in studies from the early 1980s. Additionally, they found only a weak influence of group size on home range size — meaning large groups do not have significantly larger home ranges than small groups.

This is good news because it indicates that despite the dramatic population growth, competition between the groups has not increased much. Researchers attribute this to the fact that as the population increases in size, groups avoid feeding competition by shifting their home range toward areas where gorilla densities are low.

But there were also some findings that may be cause for concern. Along with the increase in the number of individual gorillas, we have also observed an increase in the number of gorilla family groups. In the 1990s and early 2000s, as the population began to recover from its lowest and most fragile point, the gorillas monitored by the Fossey Fund were concentrated in three large groups. But in 2007, those groups began to split, evolving into nine groups of varying size. Although these groups do not seem to compete significantly for food, the study found a six-fold increase in the frequency of inter-group interactions.

Interactions between mountain gorilla family groups can be violent, leading to injury or death. Unweaned infant gorillas are most at risk of death during the interactions, as the silverbacks in opposing groups may try to kill them to increase the likelihood that their mothers will transfer between groups. Silverbacks can also become severely injured during these encounters. As the number of inter-group interactions has increased, the proportion of gorilla deaths attributed to them has doubled.

From a conservation perspective, the study’s findings imply that law enforcement and anti-poaching efforts should focus not only on areas where gorillas currently range, but also on areas of the forest where they may travel as competition for food becomes more intense and the frequency with which gorillas encounter other groups increases. The safer adjacent areas are from snares and other human-generated threats, the more likely it is that gorillas will begin to use them and make room for the population to continue to grow.