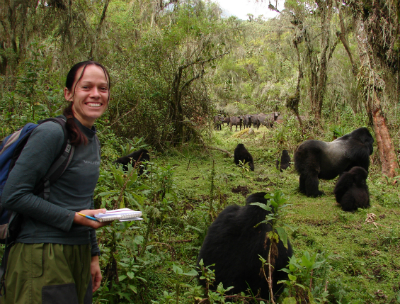 Winnie Eckardt, Ph.D., the Fossey Fund’s Judith Harris and Robert Singer, M.D. postdoctoral fellow, embarked on fieldwork for a study about stress and health in mountain gorillas in 2011. Eckardt’s study is one example of the Fossey Fund’s scientific research and “extreme” conservation programs working in tandem to protect mountain gorillas. By providing part of the funding for the study, the Orange County Community Foundation, one of Fossey Fund’s Collaborating Funders, is taking a leading role in gorilla conservation.

Over the course of 18 months at the Karisoke Research Center, Eckardt collected behavioral data and fecal samples for hormone and parasite analysis from 110 mountain gorillas. Using these data, the study is expected to yield information about the relationship between stress physiology and health in mountain gorillas and to offer insights to guide conservation and park management strategies. After completing her fieldwork in Rwanda, Eckardt arrived at the Fossey Fund’s Atlanta offices in January 2013 to begin analyzing the data. While there is still considerable work ahead, she has uncovered some interesting preliminary findings.

At this stage of data analysis, Eckardt has focused on hormonal markers of stress and parasite prevalence among the mountain gorillas monitored by the Fossey Fund in Volcanoes National Park. Determining the level of stress in gorillas, and what behaviors are associated with stress, like excessive scratching or yawning, can help scientists develop a baseline and continue to measure the gorillas’ stress in the future using non-invasive methods. By looking at parasite prevalence in the gorillas, Eckardt also hopes to uncover how stress might impact this aspect of gorilla health. When the study is complete, it will be the most comprehensive study of gorilla behavior, hormones, and parasites to date and could help map a holistic approach for measuring stress and health in mountain gorillas and helping conservationists understand what events or environmental conditions are particularly stressful for gorillas.

Eckardt explains that the mountain gorillas face significant sources of stress, which fall into two basic categories: natural and human-induced. As one might imagine, encounters with snares, humans in the forest, and veterinary interventions can all stress gorillas, both individually and as groups. Other stressors include interactions between gorilla groups, during which gorillas can be seriously injured and even killed; encounters between gorillas, people, and livestock in and outside of the park, which also amplify the risk of disease transmission between species; and even the wet, cold habitat of the Virungas—especially as the gorilla population increases and some groups are forced to move into higher altitude zones of the forest to avoid interactions. 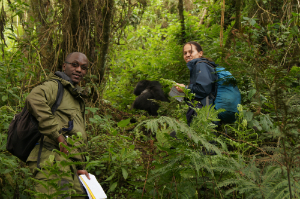 Lincoln Park Zoo’s Davee Center of Epidemiology and Endocrinology completed analysis of all of the hormone samples for the study. Using these data, Eckardt was able to validate the study’s methodology by showing that there is a correlation between stress events and specific patterns of hormone fluctuation. With the help of students from Emory University, Eckardt has also analyzed approximately two-thirds of the 10,000 parasite samples she collected. Now she is busy identifying the various parasites found in the samples. This is no easy task, because some parasites look so similar that they are nearly impossible to distinguish with a microscope alone. Eckardt presented some preliminary findings at the International Society of Wildlife Endocrinology Conference in Chicago in 2013 and will attend the International Primatological Society Congress in Vietnam in August to present her most recent findings.

“The continued and fast loss of ape habitat worldwide will likely force many ape populations into the situation currently faced by the mountain gorillas—small protected forest islands surrounded by high human density,” said Eckardt. “We believe our findings on the impact of anthropogenic disturbances and related health risks in the case of the mountain gorillas will be of great value to both the local gorilla conservation community in Rwanda and ape conservationists throughout Africa and Asia.”

Studies like Eckardt’s are an important part of the Fossey Fund’s strategy for saving mountain gorillas. When combined with protection efforts, including daily monitoring of gorillas and anti-poaching patrols, for which the Orange County Community Foundation also provides financial support, scientific studies not only allow us to measure the success of these efforts, but also to anticipate new challenges.

“We are lucky that the Orange County Community Foundation understands the importance of supporting research to evaluate and guide our conservation strategies,” said Tara Stoinski, Ph.D., the Fossey Fund’s vice president and chief scientist. “By providing financial support for multiple components of our conservation program, the Orange County Community Foundation is helping to ensure that we have a lasting impact on the survival of mountain gorillas.” The study has also had the generous support of the U.S. Fish and Wildlife Service, Emory University, the Lincoln Park Zoo, Georgia Institute of Technology, and a number of individual donors.